More thoughts to share on the quarantine, or as my daughter calls it, “hibernation.” She’s not wrong. I definitely feel like I’m hibernating: not leaving my house and eating enough carbs to last the year!

A friend sent this, it is cute and funny and too true! At least, if my name was Debbie… 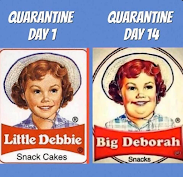 I have leased cars for many years now. My husband has a Jeep with over 100,000 miles on it, and he swears it is the last car he’s ever going to buy. He loves that car. So it made sense for me to have a new car. One new, one old. But my lease is up this month. We looked into getting a new Prius, which would be my third one. But prices were really high, and the dealers were very cocky. All five that I contacted. I tried Costco’s auto buying service. They sent me to the Toyota dealer in Coconut Creek. They offered us list price plus their absurd fees. I declined. They have been harassing me ever since. Their sales manager had the nerve to tell me that they don’t have to honor their commitment to Costco on the Prius. Whatever.

My car is like new. It is a 2017 and is immaculate, with just under 27,000 miles. We put new tires on a couple of months ago. So we decided to just buy it. The buyout on the lease was reasonable, I certainly couldn’t buy another used one at that price. These decisions were being made in February and March. But as time went on, and things got worse and worse, we started talking about it.

I hadn’t driven in over a month. My husband has a job furlough coming up. When we do go back to work (fingers crossed) we can carpool. Our jobs are only a couple of miles apart, and our hours overlap perfectly. We decided to just turn in the car, which we did this week.

We had to bring it to the dealer where we originally leased it, in Fort Lauderdale. Normally, when a lease ends, the finance company inspects the car, but now? No inspection. Just return it. So we did. My first time out of the house into the world in over a month.

I was shocked by how much traffic there was. It was 2:30 in the afternoon on a weekday. The local traffic was plentiful. We got on the highway, I95, and again, lots and lots of cars. I kept thinking about the pictures we see on TV of Paris, of NYC, with no cars at all on the road, or maybe one or two. Judging by the traffic here, you would never know there was a pandemic. Is no one in South Florida staying home?? At the dealer, we wore masks and gloves, and we saw a couple of people in masks. But most of the people there, especially those that were working, had none. I couldn’t wait to get back home. I’m not leaving again if I can help it. Not until things are under control. And with our spineless idiot of a governor, who knows when that will be.

The spring holidays have come and gone. Easter was a breeze. I splurged and ordered a Honeybaked Ham because they were advertising curbside pickup. They lied. But my husband picked it up inside the store and said they were pretty organized. Plus we got it early, on the Wednesday before Easter Sunday, so they weren’t crazy busy. I ordered three pounds of sweet potatoes from Whole Foods and got three potatoes. Weighing a bit more than a pound each. They were huge! I made Melissa Clark’s Sweet Potatoes With Bourbon and Brown Sugar, which I started making a couple of Thanksgivings ago, and if you haven’t tried it, you must!

I couldn’t get my husband his favorite Easter treat, the Cadbury egg. So we watched Claire Saffitz make a gourmet version instead! If you haven’t seen Bon Appetit’s Gourmet Makes, you are missing out.

Passover was especially wonderful this year, and I never thought that was even a possibility. First, I had trouble getting the foods I needed for the holiday. We are ordering everything now, but a few weeks ago, my husband was still shopping. He went to the big Publix near my house, and couldn’t get several items on my Passover list. No chicken. No chicken livers. No cake meal. No lamb shank bone, which Publix has provided free at the butcher counter for as long as I’ve lived in Florida. I posted on a local Facebook group about my dilemma and had several people point me to the local kosher markets. But I heard they were crowded and not practicing social distancing. And someone also posted that one of them had been cited by the health department. It wasn’t worth the risk.

I kept searching online and finally found organic chicken livers at Whole Foods, which they delivered along with a bunch of fresh vegetables, like the aforementioned humongous sweet potatoes. So that was good.

I was able to cobble together a Seder plate. I found a rack of lamb in my freezer, which I made for dinner the night before Passover so I could salvage a bone for the Seder plate. Not quite a shank bone, but it worked. I didn’t have enough chicken fat to render, but my husband found frozen rendered chicken fat at Publix. I scavenged chicken parts from my freezer (I save them for stock, things like wing tips and backs and necks) and made chicken soup and matzo balls. I made charoset, the traditional blend of apples, walnuts, and wine. I made chopped liver. I made a brisket with carrots. I made a potato kugel, the delicious Smitten Kitchen recipe that has become a tradition in my house. Passover came together.

But it was the second night that made this holiday so special. We had a Zoom Seder with my son and daughter-in-law and her family, who we really lucked out with – we love them. It was one of the best Passovers we ever had. Who would have thunk it?! My machatunim, who are vegetarian/pescatarian or some variation thereof, printed out a picture of a shank bone for their seder plate – how brilliant was that! I just wish I had thought to take a few screenshots, but I will always have my memories.

Which reminds me, many years ago, when my children were small, we were pretty broke. I was a stay-at-home mom, and we lived on my husband’s salary. It was my choice, and to be honest, if anyone had suggested that I would have taken that route, I would have laughed myself sick. Maybe if I had a job that I loved (like I do now) it would have been different, I don’t know, but I didn’t. In fact, I got fired when my (self-insured) employer learned I was pregnant! Really! Ah, the good old days. But I wouldn’t have traded a day of those years that I spent with my kids.

I am wandering far off course here but stay with me for another minute. In those days, we belonged to a synagogue that mostly had very wealthy members. My kids did not have all the material things that some of their friends had, and once in a while, I felt guilty about staying home with them. Then one day, my rabbi started talking about how the best gifts we can give our children are memories, to create memories with them. And that we could afford.

This Passover made me think of that. We are living in a historic time. God willing, there will never be another pandemic like this again. I think about all the kids right now, the ones, for all intents and purposes, being home-schooled with online instruction. All those great videos of families doing creative, fun stuff that have gone viral. This is one of my favorites:

Celebrities doing fun videos to entertain us. Like this:

Those will be good memories.

We are all going to remember this time forever. But the memories are certainly not all good.

So many people getting sick, so many dying.

So many people losing their jobs, their businesses, leading to record unemployment.

It is without a doubt the most frightening and dangerous time I’ve ever lived through.

That’s why I’m doing this. It helps me to write about it, and I want a record. I want to remember this time accurately, at least from my perspective.

When November rolls around, I hope people remember as well. But that is a post for another day.

This entry was posted on Sunday, April 19th, 2020 at 8:00 AM and is filed under Ramblings. You can follow any responses to this entry through the RSS 2.0 feed. Both comments and pings are currently closed.