THE EARL NOT TAKEN by A.S. Fenichel 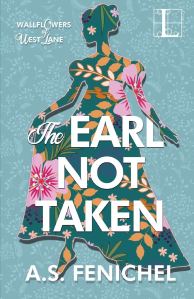 The Wallflowers of West Lane, Book 1

Left standing on the side while their contemporaries marry into society, four young ladies forge a bond to guard each other from a similar fate . . .

Finishing school failed to make a proper lady of Penelope Arrington. But as a Wallflower of West Lane, Poppy has a far more vital role—she and her three best friends have made a pact to protect each other from the clutches of dangerous, disreputable men. So when one of them is about to be married off to a duke sight unseen, Poppy makes it her mission to divine the prospective husband’s true character. If only she didn’t require the aid of London’s most unsuitable rake.

Rhys Draper, Earl of Marsden, has known the headstrong Poppy since she was a young girl, naïve to the ways of men. To her eternal chagrin—and to his vague amusement—they have been at odds over the memory of their embarrassing first encounter all these years. Now, with his services in need, Rhys sees a chance to finally clear the air between them. Instead, he is surprised by the heat of their feelings. If the two do not tread carefully, they may end up in a most agreeably compromising position

Are there certain months that historical romances are published? It feels like I haven’t read one in a while. I wasn’t sure what this book was, either. The title definitely sounds like a historical romance. The cover, less so. And the fact that it is not a mass-market paperback, you know, the little paperbacks you can slip in your bag, was also a surprise. There are some authors who go from those little paperbacks to hardcover books,  sometimes simultaneously. A lot of contemporary romances get the trade paperback treatment, but I don’t recall another historical romance being introduced as a trade paperback – the paperbacks that are roughly the same size as a hardcover book. It is a conundrum. And it is traditionally published, from Kensington. I guess in the end it doesn’t really matter – I read almost exclusively on my iPad or Kindle these days.

So back to the book! It is a very good introduction to a new series. Right away we know the series will be revolving around these four friends, and this first book belongs to Poppy. She is a thoroughly modern character living in another century, as seems to be the trend lately. It works very well here.

The trick of this book is that ostensibly, it is about Poppy’s friend, who is being forced into an arranged marriage. Poppy decides that they need to check out this Duke and find out what sort of man he is. One of these friends is a widow who was horribly mistreated by her Duke of a husband, so they are all concerned. So one would think the romance would be about the arranged marriage. But no! A very clever twist, and I liked it.

The Earl is not as complex as I might have expected, but all the characters are developed well enough to make me care about them. The meet-cute occurs when Poppy is a young girl, and she witnesses the Earl in the throes of passion, shall we say, with someone. How does that happen, you may wonder? They are outside. Up against a tree. ‘Nuff said.

I liked this book a lot. There is a good, believable story, well-deveoped characters, lots of witty banter, and a bit of heat. This is the first book of a series, and I am looking forward to the next.

This entry was posted on Sunday, April 5th, 2020 at 8:00 AM and is filed under Book Reviews, Fiction, Romance. You can follow any responses to this entry through the RSS 2.0 feed. Both comments and pings are currently closed.