THE K TEAM by David Rosenfelt 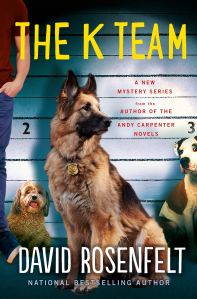 From bestselling mystery author David Rosenfelt comes a new series – a spinoff of the much beloved Andy Carpenter mysteries – about a dynamic new investigative team featuring a determined former cop and his loyal German Shepherd.

Corey Douglas and his K-9 partner, Simon Garfunkel, have recently retired from the police force. Not ready to give up the life yet, they come up with a proposal for fellow former cop, Laurie Carpenter, and her investigating partner, Marcus. Laurie and Marcus – who help out Laurie’s lawyer husband Andy on cases – have been chafing to jump back into investigating on their own, so they are in.

They call themselves the K Team, in honor of Simon. Their first job as private investigators comes to them from Judge Henry Henderson, who’s known as a very tough but fair judge, and they’ve all come up against him in court at one time or another. Though it’s hard to believe, Judge Henderson is being blackmailed and extorted, and he doesn’t want to involve the police–he needs the K Team to figure out why.

The novel is advertised as a spinoff of the very popular Andy Carpenter stories. It is, but not much changes. Andy’s wife Laurie, a former policewoman, the very vocal Marcus and Corey Douglas, a retired policeman, form an investigatory company and decide to take on cases in order to make money.

Corey was introduced in one of the latest Andy Carpenter books when he filed suit against the department he worked for demanding that they retire into his care the K9 that he had worked with. The lawsuit prevailed and the dog named Simon Garfunkel also becomes a member of the team. The group takes the name the K team thanks to Simon and their first job is to investigate a blackmail campaign against a judge with a reputation of being tough but fair. They must find out why he is being blackmailed, put a stop to it and get evidence against the blackmailers.

Corey is the only character that is not a regular in the Andy Carpenter series but takes Andy’s place as the source of wisecracks for the group. Using some personnel from the regular Carpenter family as well as an appearance by Andy himself, the writing is reminiscent of the storylines of the Carpenter series. For fans of those books, the reward is that additional plots not necessarily revolving around court trials can be utilized and still maintain the delightful styling that the reader looks for in a David Rosenfelt book.

A welcome addition to the author’s long list of entertaining fiction and also keeping in the practice of featuring beloved dogs that move in and out of the stories. And yes, the ending is the satisfying one we are accustomed to.

This entry was posted on Monday, March 30th, 2020 at 8:00 AM and is filed under Book Reviews, Crime Fiction, Fiction. You can follow any responses to this entry through the RSS 2.0 feed. Both comments and pings are currently closed.