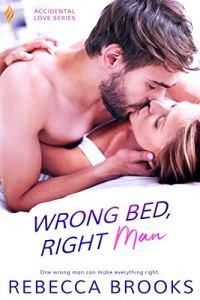 Rose Campbell is determined to get her stuff from her cheating ex-fiancé’s apartment. There’s just one problem. A sexy stranger is sleeping in her bed. Work boots and scruff so aren’t her type––except when they’re on furniture maker Owen Crowley, who is funny, kind, and speaks his mind.

The prim and proper Rose isn’t the kind of woman Owen is usually interested in. But the more he gets to know her, the more intrigued he becomes. There’s passion underneath those stiff suits of hers that he can’t wait to explore.

There’s no reason these two opposites can’t have some sexy fun––except that one thing. Rose works for the very people trying to destroy Owen’s business.

Let me just say if I judged a book by its cover, I never would have read this. I really hate the cover. But I did like the book.

It is a very short, very quick read; more fleshed out than a novella, thank goodness. I liked Rose and Owen, and the meet-cute was just that, as it should be. I did have some issues with the supposed competition between the big box furniture company that Rose worked for, and their “crush list” of small, mom & pop businesses that they want to drive out of business. Like Owen’s. Frankly, I just didn’t buy it. There is a world of difference between an Ikea with its serviceable, cheaply made, Allen wrench, DIY furniture and custom made or refinished fine furniture. They are dealing with absolutely different customers. So that was a sizable flaw in the story, as it was a major plot point.

All in all, this was an enjoyable read.

This entry was posted on Saturday, February 22nd, 2020 at 8:00 AM and is filed under Book Reviews, Fiction, Romance. You can follow any responses to this entry through the RSS 2.0 feed. Both comments and pings are currently closed.