THE APOLLO DECEPTION by Mitch Silver 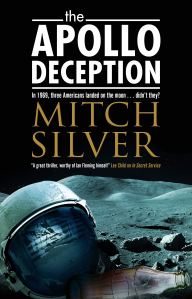 Gary Stephens is brought into a government-sanctioned cover-up when he discovers that his father helped fake the Apollo 11 moon landing in the 1960s.

After China announce a space mission to place their own flag next to the one US astronauts planted during the Apollo 11 mission, few people bat an eyelid. Shortly after this statement Charlie Stephens, a 81-year-old former filmmaker, is murdered. The incident is made to look like an accident, but why?

Going through his father’s effects, Gary Stephens – a director of beer and yogurt ads – discovers seven cans of old 35mm film. Dated before the landing, they’re identical to the footage NASA claims was shot by the Apollo 11 crew. The US flag is not and has never been in the Sea of Tranquillity, and only Tricky Dick and a handful of others knew it.

Why was the real nature of the Apollo 11 mission kept hidden? And what measures will be taken to keep the secret buried?

The United States, according to the history books, successfully landed men on the moon in the 1960s. They left many items and successfully set up an American flag in the general area of their arrival. They then left and were retrieved in the capsule designed for the reentry in the midst of the ocean. Going on to the eternal glory attached to their mission the astronauts making the trip left future moon shots to others. And there, of course, were other trips into space, including unmanned voyages around Mars, and others through our solar system and beyond.

For some reason, not readily apparent, a small group of people have always thought that the first Moon landing was staged, done for the publicity involved and perhaps to bring apparent obedience to the promise of John F. Kennedy, who resolved that the U.S. would land men on the moon before the end of the decade of the 1960s.

Mitch Silver, in an afterward of the novel, indicates that he is not one of the doubters involved with debunking the landing, but brings his readers a seat-of-the-pants novel outlining the possible consequences of a faked trip.

Gary Stephens, a filmmaker, is the son of one man that worked on the Moon Landing team. His father is killed in a boating accident and Gary begins to go through his Dad’s things. He discovers several tapes showing that the landing was staged. At the same time, China announces that they are ready to launch an expedition to the moon and plan to land in the same area as the U.S. did and plant their flag with the American banner showing solidarity, at least in the world of space travel.

Gary decides to take the tapes made by his father to the government and expose the farce. The novel does a very creditable job of describing the reactions of the U.S. to the news and their plans to launch another trip as quickly as possible to rectify the non-existence of material where it should be.

Research is evident in Silver’s descriptions of the process and events, and the creation of a definite all-nighter for his readers.

This entry was posted on Sunday, February 9th, 2020 at 8:00 AM and is filed under Book Reviews, Crime Fiction, Fiction. You can follow any responses to this entry through the RSS 2.0 feed. Both comments and pings are currently closed.