A BEGINNING AT THE END by Mike Chen 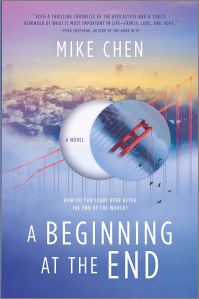 How do you start over after the end of the world?

“Not just an apocalyptic thriller, but also a timely reminder of what is most important in life―family, love, and hope.” ―Peng Shepherd, author of The Book of M

Six years after a global pandemic wiped out most of the planet’s population, the survivors are rebuilding the country, split between self-governing cities, hippie communes and wasteland gangs.In postapocalyptic San Francisco, former pop star Moira has created a new identity to finally escape her past―until her domineering father launches a sweeping public search to track her down. Desperate for a fresh start herself, jaded event planner Krista navigates the world on behalf of those too traumatized to go outside, determined to help everyone move on―even if they don’t want to. Rob survived the catastrophe with his daughter, Sunny, but lost his wife. When strict government rules threaten to separate parent and child, Rob needs to prove himself worthy in the city’s eyes by connecting with people again.Krista, Moira, Rob and Sunny are brought together by circumstance, and their lives begin to twine together. But when reports of another outbreak throw the fragile society into panic, the friends are forced to finally face everything that came before―and everything they still stand to lose. Because sometimes having one person is enough to keep the world going.

Mike Chen takes us into a world that has been decimated by a global pandemic. It is the aftermath of an epidemic that has literally wiped out more than half of the earth’s population. His well-done tale brings to life a group of people that are forced to come to grips with an event that has forever changed their lives and the lives of their children. Rob has lost his wife in the plague and is caring for his daughter Sunny as best as he can. At the same time a singer, dancer, Moira, stage name Mojo is attempting to escape the confines of a life as a performer but guided by her father who controls her every move.

At the beginning of the novel, Rob has been approached by an agency of the new government established to restore order and rebuild to prove that he is capable of caring for Sunny. If he is deemed not able to his daughter will be taken away from him and sent to a foster home. Rob has a coworker at his job and with nowhere else to go begins to talk to her about the situation with his daughter and his need to prove worthy of caring for her. Krista, his coworker, agrees to help, especially when Rob offers her pay for the time spent.

Rob, his daughter, and Krista meet Moira who enters into the story. The book takes an unforeseen twist when the government announces that a new strain of the virulent epidemic has started attacking the populations of the planet. People are forced into the controlling environment that had become lax as the initial outbreak seemed to be tapering off.

The strength of the novel is the author’s ability to build the characters involved in the story. These people faced with the horrors that have befallen them have no choice but to adapt to conditions. How they do so and their reactions to their surroundings make a good story an even better one. The reader will find that he or she is sympathetic to the reactions of the characters and will surely think of their own possible efforts to face the type of tragedy that has enveloped the earth in Chen’s book. Certainly a five star novel and one that cannot be put down until finished.

This entry was posted on Monday, February 3rd, 2020 at 8:00 AM and is filed under Book Reviews, Fiction, Sci-Fi/Fantasy. You can follow any responses to this entry through the RSS 2.0 feed. Both comments and pings are currently closed.