NOT THE GIRL YOU MARRY by Andie J. Christopher 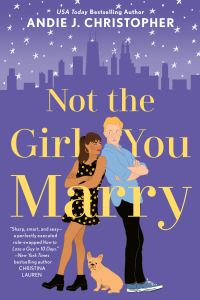 How To Lose a Guy in 10 Days gets a millennial makeover in this romantic comedy by USA Today bestselling author Andie J. Christopher.

Jack Nolan is a gentleman, a journalist, and unlucky in love. His viral success has pigeon-holed him as the how-to guy for a buzzy, internet media company instead of covering hard-hitting politics. Fed up with his fluffy articles and the app-based dating scene as well, he strikes a deal with his boss to write a final piece de resistance: How to Lose a Girl. Easier said than done when the girl he meets is Hannah Mayfield, and he’s not sure he wants her to dump him.

Hannah is an extremely successful event planner who’s focused on climbing the career ladder. Her firm is one of the most prestigious in the city, and she’s determined to secure her next promotion. But Hannah has a bit of an image problem. She needs to show her boss that she has range, including planning dreaded, romantic weddings. Enter Jack. He’s the perfect man to date for a couple weeks to prove to her boss that she’s not scared of feelings.

Before Jack and Hannah know it, their fake relationship starts to feel all too real—and neither of them can stand to lose each other.

I loved the movie this book was based on, and I liked that the book is gender-reversed, Millenial sensitive, and has a biracial lead. But somehow it just didn’t come together the way I thought it should, or would. The characters supposedly had instant chemistry, but I didn’t really feel it. The fake dating thing plays out for the entire book, until the very end, so it felt the tiniest bit unsatisfying.

I did like the characters but they could have been fleshed out a bit more. They fell a little flat for me. The con they were playing on one another often felt forced instead of more naturally occurring, if that makes sense. Maybe this plotline just works better visually, I don’t know. Or maybe because I loved the movie it was based on, my expectations were just too high. All that said, it is a very light, cute romantic romp, and ultimately, I did enjoy it. Just not as much as I had hoped.

This entry was posted on Wednesday, November 20th, 2019 at 8:00 AM and is filed under Book Reviews, Fiction, Romance. You can follow any responses to this entry through the RSS 2.0 feed. Both comments and pings are currently closed.