A HOUSE OF GHOSTS by W. C. Ryan 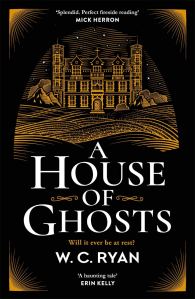 Nothing like a good old fashioned ghost story to get a reader’s attention. But couple that with a well done novel set in the England of 1917 still engaged in a world war raging just across the channel. The combination of the two events in the hands of an author at the top of his game is a sure bet to capture and keep readers glued to the book.

On an island off the coast of Devon, Lord Highmount has set up a seance in an attempt to contact his two sons who have been killed in the war. Lord Highmount is a manufacturer of materials important to the war effort has had secret plans for an effective gas mask turn up in enemy hands in Berlin. It is to determine if enemy agents will come to the seance that two people have been dispatched by the British intelligence service to attend the event. The first is Kate Cartwright a young lady that is able to see the departed and possibly communicate with them. The other is Captain Donovan recently returned from the trenches of France and a first-class secret operative.

The guests gather at the residence of Lord Highmount and we immediately learn that most of them have something to hide. The story develops as a major storm shuts down the island and prevents any travel between the mainland and the residence. Part of the tale involves Kate and the mysterious Captain Donovan developing romantic feelings towards each other. Nice touch and probably foretelling future novels involving the two.

Events proceed and the reader is treated to two seances with events described by Ryan and allowing the plot to thicken. A good story and coupled with a good writing style means a good book and an interest in future novels by the author.

This entry was posted on Monday, November 18th, 2019 at 8:00 AM and is filed under Book Reviews, Crime Fiction, Fiction. You can follow any responses to this entry through the RSS 2.0 feed. Both comments and pings are currently closed.