ANYTHING BUT A DUKE by Christy Carlyle 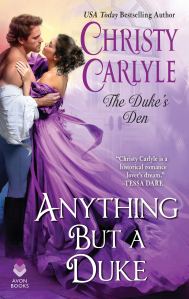 Self-made man Aidan Iverson has seen more closed doors in his thirty years than he’s ever cared to count. As a member of the elite Duke’s Den, he has all the money he could possibly need but the one thing he can’t purchase is true power. If roguish Aidan can’t buy his way into society’s hallowed halls, he’ll resort to a more extreme measure: marriage.

Brought up to be a proper lady, the only thing Diana Ashby desires is to be left alone to the creation of her own devices. But when her dreams are crushed, she must find another way to secure the future of her invention. Knowing his desire to enter her world, Diana strikes a deal to arrange Aidan’s marriage to the perfect lady—as long as that lady isn’t her. She doesn’t need any distractions from her work, particularly of the sinfully handsome variety.

As Diana and Aidan set out to find him an aristocratic match, neither are prepared for the passion that ignites between them or the love they can’t ignore.

In the Duke’s Den, can happiness ever be a winning prospect?

I really liked the first book in this series, A Duke Changes Everything, but I don’t think they need to be read in order. This one stands on its own quite well.

Aidan has had a troubled upbringing, to say the least. But by sheer determination, hard work, and a bit of luck, he is now one of the wealthiest men in London. But he is not of the aristocracy, and soon that becomes his most ardent goal. He wants to be recognized by the peerage, and he figures the only way to do that is to marry royalty. Since so many title holders are broke, it seems like an easy feat. Until he meets Diana.

Diana lost the father she adored. He was an inventor, and she seems to have inherited that ability, and is bound and determined to make a success of at least one of her inventions. Her mother, on the other hand, only wants her to marry well. Well enough to support the family, as her father’s bad business decisions has left them not very well off. Diana strikes a deal with Aidan; she will introduce him to her friends in society, if he will finance one of her inventions. It seems like a really good plan, except for the chemistry between Aidan and Diana, which is throwing a major wrench into the project.

I thoroughly enjoyed the second book of this series, and I’m looking forward to the third. Carlyle is a good storyteller, she kept me turning the pages until I reached the happily every after.

This entry was posted on Friday, October 11th, 2019 at 8:00 AM and is filed under Book Reviews, Fiction, Romance. You can follow any responses to this entry through the RSS 2.0 feed. Both comments and pings are currently closed.