THE NOBODY PEOPLE by Bob Proehl 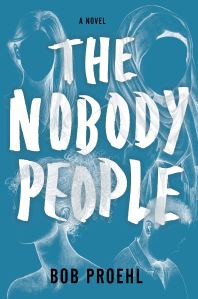 Bob Proehl’s interesting story revolves around the possible next step in human evolution. People are being born with certain abilities beyond those of so called normal people. Levitation, turning invisible, mind control, ability to shape a room beyond the capacity of normal people to see and enter it. Suddenly people with these extraordinary characteristics are being born and growing to adulthood.

Avi Hirsch has noted that his daughter Emmeline is different, but can’t put his finger on how and why until more and more people are found that have an ability beyond the normal. And, as they are identified, the general population begins acting as if they are dangerous. Certainly a feeling held by most segments of the population towards a minority group in their midst. Over the centuries this has included race, religion, color of skin and other factors contributing to a marked difference between this minority and the larger, so called normal, segment of the population.

Avi is a journalist and begins investigating these “others” with the hope that his findings can help prevent harm to Emmeline. It is through him that knowledge of the “different” segment of humans emerges, and as has been done throughout human history suspicion emerges about the new para normals. The novel tracks events from the founding of secret schools to educate the new group to a war developing between them and normals. It certainly doesn’t help when one of the new group turns rogue and is involved with murder of the normals.

An interesting novel somewhat marred by a long mid book section that spends a good deal of time in redundant descriptions of the powers held, and the personal conflicts between the others. This section could force an interested reader to lose interest and elect not to complete the book. If one makes it through this part, the ending is well done and completes the novel.

This entry was posted on Sunday, September 29th, 2019 at 8:00 AM and is filed under Book Reviews, Crime Fiction, Fiction, Sci-Fi/Fantasy. You can follow any responses to this entry through the RSS 2.0 feed. Both comments and pings are currently closed.