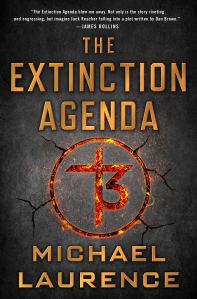 Michael Laurence starts out with the beginnings of an extremely interesting novel set on the U.S. – Mexican border and involving the constant effort of the Border Patrol to keep out illegal aliens. He then moves forward and presents his readers with a much larger and more engrossing plot.

James Mason and his strike force are met as they launch a raid against what are perceived as smugglers, but encounter evidence of an adversary aiming to destroy humanity for their own evil intentions. During the raid, many of Mason’s strike force are killed as well as his partner who was his mentor during his early years with his bureau.

Returning to his division, James becomes possessed by what he is sure that he found, and in spite of his superior’s opposition to the idea, launches his own investigation into what he has seen and determined in the building raided on the border. He is positive that what is planned is far and away over and above a case of smuggling in material into the U.S. Proving that he is correct in his assumptions, his wife, who is an investigator for the Internal Revenue Service, is killed in an explosion while investigating a potential suspect in what is probably a warning to leave the investigation.

With the help of two of his friends, Mason finds that what he has uncovered is a conspiracy that has been hatched more than a hundred years earlier, about the period of the first World War. The investigation, what is uncovered, and the events involved in solving the mystery are handled in a fashion geared to keeping the reader glued to the book and wondering what is really involved.

The ending is a logical one stemming from the events depicted and also leaves enough room for more books about James Mason and the two friends that helped him in this one. Based on the way Laurence handles this novel, they should also be all-nighters and sought after by his readers.

This entry was posted on Monday, September 2nd, 2019 at 8:00 AM and is filed under Book Reviews, Crime Fiction, Fiction. You can follow any responses to this entry through the RSS 2.0 feed. Both comments and pings are currently closed.