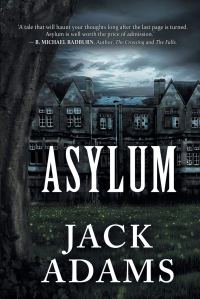 Nathan and Adam are two 10 year old boys that are best friends. They stay together, play together and explore the area they live in completely together. Near their homes there is a huge facility that is known as the Lunatic Asylum. And that in spite of its non politically correct designation it was. It was a hospital dedicated to the care and treatment of mentally disabled individuals.

One day, when coming near to the fence surrounding the institution, the boys spotted a man sitting on the other side and ventured over to talk to him. He sounded quite lucid, told them his name was Joe and the three struck up a relationship that continued for quite a while. They visited the spot where Joe was at and among other things found that he was an artist before he was sent to the asylum. Even while there he drew many things including the happenings occurring in and the people residing in the institution.

One day Joe did not meet them and they didn’t see him again. The meetings were forgotten and the boys grew up, forgetting Joe and eventually opening an office together. One had become a private investigator due to several years of employment as a police officer and the other a psychologist after university training. They hired a secretary and began doing business when out of the blue a letter from a solicitor was received asking to meet with both boys, now men.

Meeting with him they had the most pleasant surprise of learning that Joe, the man they had talked with at the asylum had remembered them. Not only remembered them but left them each a large sum of money. It seemed that Joe had been a successful artist and made money selling his paintings. His memories of the boys were very pleasant

One favor was asked in return – to investigate happenings at the asylum and about Joe. This favor throws them into discovery of the most heinous breach of ethics and normal behavior possible. How they go about this and where it leads, how is Joe involved form the real meat and bones of the novel. This book is Adams’ first published one and showcases the entrance of a gifted author allowing his readers to pick up and enjoy his forthcoming novels. Very well done.

This entry was posted on Sunday, August 4th, 2019 at 6:00 AM and is filed under Book Reviews, Crime Fiction, Fiction. You can follow any responses to this entry through the RSS 2.0 feed. Both comments and pings are currently closed.

2 Responses to ASYLUM by Jack Adams