IF SHE WAKES by Michael Koryta 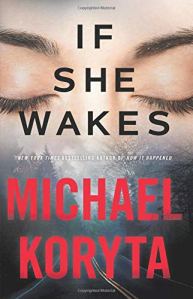 The book opens as Tara Beckley, a senior at Hammel college, a small university level school situated in Maine, is driving a visiting dignitary to a conference being sponsored by her college. Suddenly, there is a horrendous accident, killing the professor and leaving Tara in a vegetative state. She is aware of her surroundings and what is going on, but in what is termed “locked-in syndrome,” unable to move or communicate with the outside world.

Abby Kaplan, a former stunt driver involved in an accident resulting in one fatality, is now an insurance investigator is assigned by the college to look into the accident and make a determination of who is at fault. The events occurring in the novel revolve around both Abby and Tara and what happens to them. Tara, of course, is completely paralyzed but soon realizes that someone wants her dead in order to cover their tracks regarding the accident. Abby has her own demons beginning with her early career as a very talented stunt driver, but than stopped when she is involved in the accident resulting in a fatality.

Koryta’s reputation as an author that easily grabs his readers and creates situations that keep them glued to the book does it again. With the introduction of a professional killer named Dax, the son and also the nephew of two brothers that were famed for their murders, the reader cannot put the book down until finished. The description of Tara caught in her state, yet aware of the outside world, gives the reader an introduction to a human situation that, fortunately, is not a common one. Abby, normally a brave young lady must conquer her fears of driving while working on the case and does find that those circumstances hinder her in a situation that demands she override them. Even Dax is capable of attracting the reader in his own cold blooded way.

The novel moves with the ease Koryta has always demonstrated. The ending flawlessly flows from the events described in the book, and my recommendation to all is read this one and than just sit tight until Koryta’s next book comes out.

This entry was posted on Saturday, July 6th, 2019 at 6:00 AM and is filed under Book Reviews, Crime Fiction, Fiction. You can follow any responses to this entry through the RSS 2.0 feed. Both comments and pings are currently closed.