HOW TO LOSE A FIANCÉ by Stefanie London 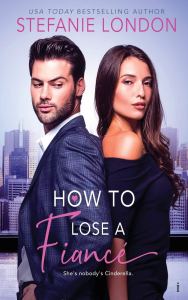 Sophia Andreou has always been the “good daughter” who tried to keep her domineering father happy. She followed the rules and did everything that was asked of her. But this time, her father is asking too much. The family company is crumbling, and her father has arranged a marriage to a Greek billionaire who can save their property business. What?! Umm no thank you. If Cinderella can dress up to win a prince, surely Sophia can do the opposite and ditch hers…

Dion Kourakis has come a long way from being an orphan with only a single friend to his name. Now he runs a billion-dollar investment company and has the respect of everyone in Europe. His charming personality covers a lot of emotional scars, including his desire to make his mentor proud.

Dion doesn’t exactly want a bride to go along with his next business deal, and he plans on letting the lass down gently when they meet…

Only, his future bride has turned out to be nothing like what he thought she’d be. She’s quirky and has a habit of turning up to social events in strange outfits. It doesn’t take a genius to figure out what she’s up to, but the harder she tries to convince him she’d be an awful wife, the more he wants to convince her they’d be perfect together.

This is a very fast read, it’s just over 200 pages. But London does a really good job of character development of the main protagonists in a very tight story, my usual pet peeve with books this short. That said, it would have been better with more of Sophia’s mother’s backstory. That character was integral to the plot yet barely developed. Actually, her father, too, should have been more developed. And I didn’t understand the relationship between Sophia’s father and Dion’s father; the plot had some holes in it for sure. But this book is all about the romance, and there was good development there plus some really funny, laugh out loud scenes mixed in with some hot sex. If you want a short, entertaining, fun, sexy read, this is your book. I enjoyed it.

This entry was posted on Wednesday, July 3rd, 2019 at 6:00 AM and is filed under Book Reviews, Fiction, Romance. You can follow any responses to this entry through the RSS 2.0 feed. Both comments and pings are currently closed.