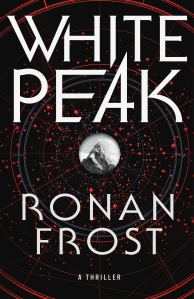 Frost presents a novel with both high adventure and some science fiction. The book is exciting, a fast read and one geared towards keeping the readers glued to the pages until finished.

The story opens as Rye Mckenna is holding onto a telephone listening to his wife being murdered when she is caught in a shooting at the mall she was shopping at. Rye is devastated. He is approached by a man representing the multi billionaire Greg Rask and asked if he would like to exact revenge for his wife’s murder.

Rask is assembling a team to search out a map that, if real, will point out where Hitler’s Ahnenerbe hid the three stones that have mystic curative powers. Hitler was a firm believer in the occult and did have this organization make many expeditions searching for the stones. Rask, who has a terminal illness, believes that the map will prove useful to him in curing the disease and has already spent a fortune looking for a miracle.

Rask does arrange for Rye to meet with his wife’s murderer even with the individual in prison. Rye has his chance to exact revenge and does so after which he agrees to join Rask’s team. Along with the other members of the squad journeys are undertaken both to France and than to Tibet where the search is centered on discovery of a lost city where the map is thought to reside. The action is fast, the writing compelling and the reader experiences the feeling that he or she is with the group and traveling in some of the most exotic places on earth.

The ending is one based on a science fiction theme and I felt that it was a bit out of kilter with the rest of the book. It does cause the novel to become more than a little off balance and might even spoil a good book with a poor finale. But again the beginning is compelling and the description of an exotic land well done. This factor could very well negate the ending.

This entry was posted on Saturday, May 25th, 2019 at 6:00 AM and is filed under Book Reviews, Crime Fiction, Fiction. You can follow any responses to this entry through the RSS 2.0 feed. Both comments and pings are currently closed.