LADIES WHO PUNCH by Ramin Setoodeh 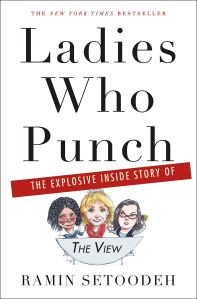 The Explosive Inside Story of “The View”

Like Fire & Fury, the gossipy real-life soap opera behind a serious show.

When Barbara Walters launched The View, network executives told her that hosting it would tarnish her reputation. Instead, within ten years, she’d revolutionized morning TV and made household names of her co-hosts: Joy Behar, Star Jones, Meredith Vieira and Elisabeth Hasselbeck. But the daily chatfest didn’t just comment on the news. It became the news. And the headlines barely scratched the surface.

Based on unprecedented access, including stunning interviews with nearly every host, award-winning journalist Ramin Setoodeh takes you backstage where the stars really spoke their minds. Here’s the full story of how Star, then Rosie, then Whoopi tried to take over the show, while Barbara struggled to maintain control of it all, a modern-day Lear with her media-savvy daughters. You’ll read about how so many co-hosts had a tough time fitting in, suffered humiliations at the table, then pushed themselves away, feeling betrayed―one nearly quitting during a commercial. Meanwhile, the director was being driven insane, especially by Rosie.

Ladies Who Punch shows why The View can be mimicked and mocked, but it can never be matched.

By the time I heard about this book, it was too late to get a digital galley, always my preference. I love reading on my Kindle or iPad, especially at night, because I don’t have to wear my reading glasses. By the end of the day I’m tired and I find glasses annoying at best. Anyway, I requested a review copy from the publisher and they were kind enough to send me a finished copy (hardcover) and much to my surprise, the book on CD.

I don’t listen to very many audio books because I find my mind wanders, but nonfiction I can do. I also used to have a ridiculously short (8 minute) commute to work. My new job is a 20 minutes commute which works much better for book length material. But then I was stumped by this 20th century technology. Did I have anywhere to even play a CD? I am all in on digital technology and love Audible and my library’s digital audio books. Much to my surprise, my car (2 years old) had a CD player in it. Who knew! So I decided to listen.

I was also trepidatious about the reader – the author reads the book and that is often a recipe for disaster. The best readers are professional, often actors, often famous actors, and know how to read to keep the listener’s attention. Most authors know how to read. Period. But Setoodeh did a really good job. He sounded just dishy enough to give the book the flavor he intended and I was pleasantly surprised. My only complaint was that disc 6 (out of 8) was defective, I had to wait to get the printed book back from my mother-in-law (who loved it, by the way) to read the bit I was missing. But all in all it was a very positive listening experience.

I am a long time fan of The View; I’ve watched it, off and on, for most of the 20+ years it’s been on. I was usually working when it aired, so I recorded it for many years, especially the Rosie-then-Whoopi-then-Rosie&Whoopi years. I’m not sure when I stopped but it’s been at least a few years I would say, so now I just catch it when I’m home, or occasionally when the ladies make the news and I can find clips on YouTube. So I definitely had opinions on the show and its hosts and was looking forward to reading all the dirt. Why not, life is short – you may as well have fun now and again!

The biggest takeaway for me was twofold; Barbara is an excellent liar and no one, not one single host, ever left on their own accord. They were all fired and Barbara, despite her protestations to the contrary, had a hand in most, if not all of them. Even Barbara’s retirement seemed somewhat sketchy to me. My take: it seemed like she was goaded into doing things that made her lose control of the show. Then she was coerced into retiring, which turned into a year long retirement extravaganza during which she reconsidered and did not want to retire. But retire she did. There were definite intimations of her frailty, both physical (her “shuffling”) and mental (memory loss.) I can’t feel too sorry for her though, her career was longer than almost anyone else in television except for maybe Tom Brokaw (and that’s just a guess.)

All that said, Barbara is given full credit, and rightly so, for creating a new daytime television dynamic, changing the landscape of daytime talk shows forever. The most obvious clone is “The Talk” but it seems to me all the daytime political shows, even the cable network shows like “Morning Joe” and Trump’s fave, “Fox and Friends”, all seem to have been gleaned from “The View.”

If you are/were a fan of “The View” you won’t want to miss this book. If you like celebrity gossip, the same. I enjoyed it.

This entry was posted on Tuesday, May 14th, 2019 at 6:00 AM and is filed under Book Reviews, Nonfiction. You can follow any responses to this entry through the RSS 2.0 feed. Both comments and pings are currently closed.