THE BETTER SISTER by Alafaire Burke 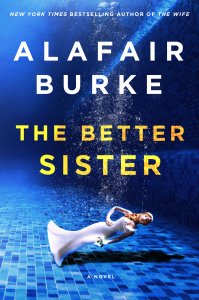 Keep your enemies close and your sister closer.

Though Chloe was the younger of the two Taylor sisters, she always seemed to be the one in charge. She was the honor roll student with big dreams and an even bigger work ethic. Nicky—always restless and more than a little reckless—was the opposite of her ambitious little sister. She floated from job to job and man to man, and stayed close to home in Cleveland.

For a while, it seemed that both sisters had found happiness. Chloe earned a scholarship to an Ivy League school and moved to New York City, where she landed a coveted publishing job. Nicky married promising young attorney Adam Macintosh and gave birth to a baby boy they named Ethan. The Taylor sisters became virtual strangers.

Now, more than fifteen years later, their lives are drastically different—and Chloe is married to Adam. When he’s murdered by an intruder at the couple’s East Hampton beach house, Chloe reluctantly allows her teenage stepson’s biological mother—her estranged sister, Nicky—back into her life. But when the police begin to treat Ethan as a suspect in his father’s death, the two sisters are forced to unite . . . and to confront the truth behind family secrets they have tried to bury in the past.

Oh, Alafair! What a terrific book; this was an all nighter for me.

I am not a fan of the unreliable narrator for the most part, but certain authors – and Burke is one of them – do such a good job that I’m hooked. This is such a great story. Sisters who married the same guy? Estrangement seems like it would be the least of their problems. And that turns out to be true.

Adam gets sole custody of Ethan when he leaves Nicky and moves to New York. Ethan is just a toddler so when Chloe marries Adam, she becomes his stepmom, and she is a good stepmom for the most part. But every family has their secrets and Burke is masterful at unspooling them at a pace that just keeps you turning pages.

Adam is killed and Ethan is the prime suspect as the family spirals ever downward. This domestic thriller evolves into a legal nightmare with family boundaries constantly changing until the shocker of an ending. Don’t miss it!

This entry was posted on Sunday, May 5th, 2019 at 6:00 AM and is filed under Book Reviews, Crime Fiction, Fiction. You can follow any responses to this entry through the RSS 2.0 feed. Both comments and pings are currently closed.