THE TIME COLLECTOR by Gwendolyn Womack 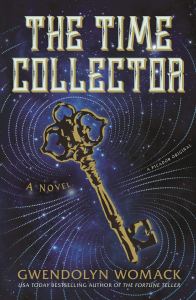 Womack has come up with quite an ingenious idea and used it to bring us a very entertaining novel.

Roan West was born with a unique gift given to him by nature. He can hold an object in his hands and glean it’s history back as long ago as the time the piece came into being. In his lifetime Roan has personally made a fortune but more important has devised a method of helping people by examining a valuable object, detecting where it originates and if feasible returning it to its rightful owner or their descendants. He has also met a few other individuals with the gift and is part of an international organization they belong to.

The problem for Roan is that he feels alone in life since there are no women he has met that can live with him and the gift he possesses on a one to one basis.

By sheer chance he comes upon a young lady, Melicent Tilpin, who has earned more than a million dollars selling a priceless pocket watch which she admits she has discovered by “sensing it”. Roan seeks her out to warn her to hide her gift since there are people that would love to use it for their own purposes and possibly do harm to Melicent.

The two meet and become involved with a problem involving an associate of Roan who has used his own intuitive powers to obtain a ring owned by the famed mathematician and philosopher Rene Descartes. The ring was found in an area that it should never have gotten to which brings up the concept of “out of place artifacts” or “ooparts.” These occurrences provide puzzling circumstances for Roan and his group. Since Stuart, the associate and friend of Roan, has disappeared when the ring was publicized, it is feared that he was kidnapped to obtain it.

The novel certainly presents the circumstances and events surrounding the search for both Stuart and Descartes’ ring but it also sets up a well described romance between Roan and Melicent. The difficulty and finally joy in finding a person with the same gift as each possesses is very logically handled by the author and if two people with the same gift got together, they would most likely handle the relationship in the manner described. Hopefully, the stage is also set for additional works about the two and it would certainly attract a wide audience.

This entry was posted on Wednesday, April 24th, 2019 at 6:00 AM and is filed under Book Reviews, Fiction, Sci-Fi/Fantasy. You can follow any responses to this entry through the RSS 2.0 feed. Both comments and pings are currently closed.