THE GHOST MANUSCRIPT by Kris Frieswick 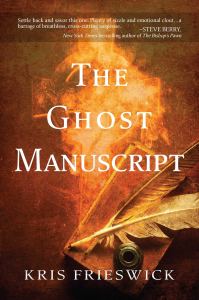 Carys Jones has a very unusual profession. She makes her living authenticating rare books for clients like museums, galleries, and wealthy collectors that can afford the high costs of establishing authenticity of the item or items they are interested in.

We meet her at the moment that her largest current customer is committed to an insane asylum. He makes a deal with Carys to authenticate a book and also follow it’s printed clues to a destination. In return he offers her his entire collection of rare books worth millions if she will successfully find the item that the book provides clues for. The veritable offer that cannot be refused sets Carys off on the adventure of a lifetime.

The item being sought is a tomb. Of whom is a find of all time and if excavated could change the course of history, possibly reshape national boundaries, and revamp all modern thought about the historic past. The estimated carbon dating for the writing of the book places it about the middle of the sixth century A.D. The writer is a monk that did live at that time, residing in a section of what is currently Wales.

The path to solving the puzzle delineated by the manuscript lies in a trip to Wales. Carys goes there, finds a romance with a young Welshman who helps her and also some confrontations with the ghost of the Monk that wrote the book.

To remove the book from the possibility of becoming a ghost story Frieswick offers an explanation of the spectral appearances that may be what is happening to Carys. Could be, but the ghost’s appearances does become important to several events depicted. The reader will be able to decide on their own which explanation is valid.

When it develops that the tomb in question is actually in the New World the action moves to the Cape Cod area of the United States. The finale of the novel becomes a bit of a spoiler when it develops into something that while a surprise, doesn’t do justice to the the crafting of the story. It is as if Frieswick found she was at the end of the main great idea and reached out for the first ending available. In spite of this I must indicate that future books by the author will be sought by me with a good deal of anticipation.

This entry was posted on Thursday, April 4th, 2019 at 6:00 AM and is filed under Book Reviews, Crime Fiction, Fiction. You can follow any responses to this entry through the RSS 2.0 feed. Both comments and pings are currently closed.