THE HERO by Robyn Carr 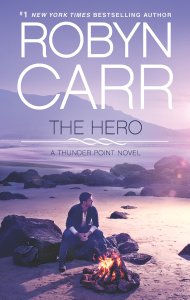 With warmth and sensitivity, #1 New York Times bestselling author Robyn Carr shows readers that falling in love can be the bravest act of all.

In a moment of desperation, Devon McAllister takes her daughter and flees a place where they should have been safe and secure. She has no idea what is around the next bend, but she is pretty certain it can’t be worse than what they’ve left behind. Her plan is to escape to somewhere she can be invisible. Instead, an unexpected offer of assistance leads her to Thunder Point, a tiny Oregon town with a willingness to help someone in need.

As the widowed father of a vulnerable young boy, Spencer Lawson knows something about needing friendship. But he’s not looking for anything else. Instead, he’s thrown his energy into his new role as Thunder Point’s high school football coach. Tough and demanding to his team, off the field he’s gentle and kind…just the kind of man who could heal Devon’s wounded heart.

Devon thought she wanted to hide from the world. But in Thunder Point, you find bravery where you least expect it…and sometimes, you find a hero.

This is the most suspenseful book in the series so far. Devon is the latest addition to Thunder Point, by way of her “cousin”, Rawley. Rawley is a character that has been in the Thunder Point series since the first book, but has always been a bit of an enigma. Here we come to know him a little bit better, although that is not saying much. But we find out the most important thing; he, like almost everyone else in town, is a good person with some heavy baggage. In his case, it’s baggage that he’s been toting around since the Vietnam War. He has had PTSD issues and is known for mostly not saying much, so hard to get to know. But when he reaches out to Devon and her daughter Mercy, we can see him softening.

But this is a romance and Rawley is not the love interest. Spencer is. Spencer is a fairly recent widower, with an unusual situation with his son Austin. Spencer’s wife suffered with cancer for a few years before finally succumbing to the disease. But shortly before her death, her family was tested to see if anyone would be a good candidate for a bone marrow transfer. And that testing revealed that Spencer was not Austin’s father.  Spencer’s starting over in Thunder Point makes a lot of sense; he and Austin need a fresh start, need to get away from all the sadness that permeated their lives for years.

Devon has her own history that I knew was going to lead to, well, let’s just say no spoiler alert here. I kind of knew what was going to happen but didn’t know when or how it would be resolved, so still plenty of suspense going on in this book.

Again it is the characters that make the story. Even the reclusive Rawley adds more depth to the story, the town and its inhabitants. I am really enjoying my stay in Thunder Point, and rolled right into book four, The Chance. Another excellent read from Robyn Carr, who has become one of my favorite authors. She writes small towns in the northwestern United States, somewhat like Debbie Macomber does, but puts a more realistic spin on things. People occasionally use bad language. They have sex! Even before they marry! Nothing too gratuitous, but there is no denying it either.

I am loving this series. My biggest criticism is that the books tend to end somewhat abruptly, but maybe that’s by design. I don’t seem to be able to finish one and go somewhere else, Carr has turned into my crack! Totally addicting reads but I’m not complaining.

This entry was posted on Saturday, March 16th, 2019 at 6:00 AM and is filed under Book Reviews, Fiction, Romance. You can follow any responses to this entry through the RSS 2.0 feed. Both comments and pings are currently closed.