THE CURRENT by Tim Johnston 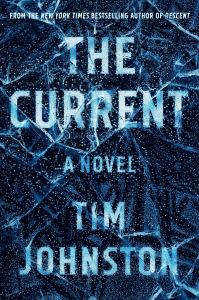 A captivating novel about two murders 10 years apart and how they are intertwined, tearing up the people living in a small Minnesota town.

Caroline Price and Audrey Sutter are two young women going to the same University. They have become good friends and take to sharing their experiences and confiding confidential matters to each other. When Christmas and New Year’s break comes up, circumstances place them together in Caroline’s car driving to their respective homes which are fairly close together.

Caught up in a huge snow blizzard the two stop at a roadside fast food store in Iowa to get some coffee and donuts. Audrey, going into the store, is attacked by two men in a rape attempt. She is saved by Caroline who runs inside and uses mace to stave off the attackers. Dashing out and meaning to run away from the attackers they drive in a completely unsafe manner for the conditions caused by the snow.

When stopping to get their bearings their car is pushed by another car coming up behind them into an iced over river, breaking through the ice and sinking into the fast flowing water that is underneath. Caroline is killed while Audrey miraculously survives and returns home to the Minnesota town she lives in with her father. The driver of the other car is sought for the crime which brings back memories of a similar murder that happened ten years earlier. That murder was never solved although suspicion forced a young man to flee the area.

Johnston utilizes a writing style that fully describes the actions in the book in a manner that keeps the novel moving rapidly, portrays the characters both via describing their actions and having them also speak at the same time. It is a style that causes a good novel to become mesmerizing and the reader totally captivated.

The ending is a perfect capstone for the book, but is by no means a fairy tale one and does not set the groundwork for a sequel. An excellent narrative which will cause readers to eagerly await the next book by Johnston.

This entry was posted on Tuesday, January 22nd, 2019 at 6:00 AM and is filed under Book Reviews, Crime Fiction, Fiction. You can follow any responses to this entry through the RSS 2.0 feed. Both comments and pings are currently closed.