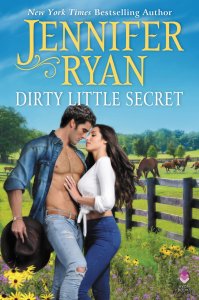 Noah Cordero is a modern-day cowboy who loves three things: ranching, his younger sister, and his step-father. John Cordero groomed Noah to take over the Montana spread where he learned to ride and work the land. But when John unexpectedly dies, he leaves half the ranch to a woman Noah doesn’t even know.

Roxy shares Noah’s last name, but not his blood. Estranged from her father, haunted by regrets, and eager to escape her notorious mother’s past, she is forced to fulfill her father’s last wishes. Inheriting means sharing a home with infuriating, challenging, and oh-so-tempting Noah. But John didn’t just make her owner of his ranch and guardian to her sister, his hidden sideline is her worst nightmare—she’s the new owner of the notorious Nevada brothel called Wild Rose Ranch where she grew up.

As their strictly business relationship starts to turn to true love, Roxy begins to wonder, what will happen when Noah discovers her dirty little secret?

Roxy is one tough broad, and I mean that in the best possible way. Growing up with a mother who’s a drug abusing prostitute is no picnic, and having a father who sends checks but has no real presence in her life isn’t much help. But Roxy prevails, and when her father dies and she inherits, things finally start going her way. Especially with her father’s adopted son, Noah.

The sparks are flying but they both are fighting their attraction. The relationship sort of stumbles along and I often felt like I missed something. But I liked the characters and I wanted them to get together and get their happily ever after, so it worked for me. I’ll definitely give the next book in the series a try.

This entry was posted on Tuesday, December 18th, 2018 at 6:00 AM and is filed under Book Reviews, Fiction, Romance. You can follow any responses to this entry through the RSS 2.0 feed. Both comments and pings are currently closed.