THE WINTER SOLDIER by Daniel Mason 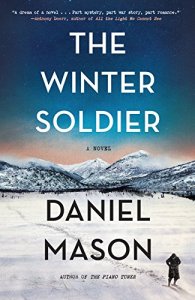 Daniel Mason presents a truly monumental book about a great love affair amidst the horrors of war. It is set during the period of World War I and along the eastern front in which Austria was fighting Russia.

There are two main protagonists involved in the story. The first is a young man named Lucius who was a medical student in Vienna when war broke out. His father had been an Austrian officer in previous conflicts and glorified the tradition of war urging Lucius to enter the military.

Lucius, on the other hand, offered his credentials as a medical student in order to work at a field hospital attending to war wounded. He is accepted, but much to his chagrin ends up at a commandeered church situated in a remote valley in the Carpathian mountains. It is there that he meets sister Margarete who is the only other qualified medical person since the other doctors stationed there have deserted. Lucius has never operated on anyone but finds that he can allow himself to be guided by Margarete who has assisted in almost all situations. She helps him in many ways allowing him to function as he should without either an actual medical degree nor real experience. It is no surprise that the two develop feelings for each other.. The romance is slowed by the fact that Margarete has taken vows. While slowed at first their love grows and soon becomes all consuming.

Mason is a medical doctor and explains quite clearly the state of medicine existing at military hospitals near the front lines during that period He also very aptly describes Lucius’ growth into his work. Lucius logically finds ways to treat grievous wounds normally not seen outside of battle casualties. He is introduced to the little known problem of what is called combat fatigue and how it can destroy men without the appearance of any physical wound. Lucius tries many medicines and treatments in working with these mentally wounded individuals and this alone is quite an experience for any reader.

As the love grows between our two central characters they get into the habit of leaving the hospital for short periods in order to be together. During one long walk they split up and Lucius arrives back at the hospital first. When Margarete does not return in a normal period Lucius sets out again in order to find her. Walking for quite a while he suddenly finds himself in the midst of a battle and has to run and hide in order not to be killed. The turning tide of war develops into other assignments with no return to his hospital and Margarete.

The absolute strength of this novel is the powerful depiction of Lucius and Margarete. They live and breathe, face real conflicts and are beset with the doubts that must be present in periods of constant stress. The resolution of their story is one that would be a reality in view of their experiences during a war and the battles fought in that war. The novel will stay with readers for a long time after finishing it. The only way to describe it is to indicate that I was very moved and finished with the feeling that I had taken part in a great work through reading Mason’s book.

This entry was posted on Thursday, September 13th, 2018 at 6:00 AM and is filed under Book Reviews, Crime Fiction, Fiction. You can follow any responses to this entry through the RSS 2.0 feed. Both comments and pings are currently closed.