THE EXES’ REVENGE by Jo Jakeman 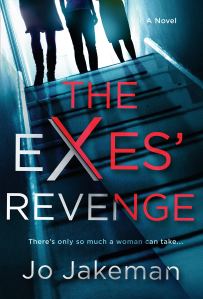 Philip Rochester is a bully, a despot and the epitome of a man that terrorizes a woman once she makes the mistake of marrying him. Not a very savory character and a lot different from the norm of leading characters in a novel. But Jakeman has succeeded in bringing him to life in a book featuring him vis-à-vis three women that have formed important parts of his life; his ex wife, his present wife currently being divorced by Philip and his girlfriend whom he is working towards making his third wife.

We are exposed to the feelings of his current wife who has endured being ridiculed, made to feel inadequate and wondering what she has done wrong as Philip has increased his overbearing treatment of her.

The story begins at Philip’s funeral with succeeding chapters listed as so many days or years prior to the funeral. Imogene, the current wife has had a child, a boy with Philip, and is desperate once she finds out what he is to keep her son away from him. His work as a policeman allows him contacts that Imogene fears will help him gain custody of Alistair, their son, with official lies backed up by the power of the police.

The ex-wife and his girl friend come into play in the story as it develops. Each has become enamored of Philip and only begins seeing what he is as the three women face his conniving to gain control of his son as well as the house that he and Imogene live in.

The book is Jakeman’s first and certainly allow an emerging literary talent to create a following that will enjoy this one and look forward to future novels from this author.

This entry was posted on Tuesday, September 11th, 2018 at 6:00 AM and is filed under Book Reviews, Crime Fiction, Fiction. You can follow any responses to this entry through the RSS 2.0 feed. Both comments and pings are currently closed.