THE MIDDLEMAN by Olen Steinhauer 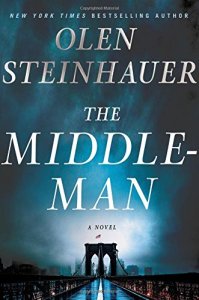 Steinhauer postulates a United States on the brink  of revolution due to the uncaring and selfish policies of our elected leaders. Consequently, in the early summer of 2017, four hundred people just disappear, leaving their worldly possessions behind them.  Where have they gone to and what is the reason for the disappearance? When heard from the group styles itself the Massive Brigade and they believe that necessary change is not coming fast enough to really bring the country to again be prepared to take care of the cultural needs as well as those necessities vital for life such as food and shelter for the population.

FBI Special Agent Rachel Proulx has been following the sprouting of left wing political groups for several years and is very familiar with Martin Bishop who is the charismatic leader of the Massive Brigade. But Rachel has her work cut out for her in getting her peers and supervisors at the FBI to take thedissidents seriously. She digs into the workings and leadership of the Massive Brigade and what she discovers, including murder shocks the country and sends a wake up call to the Administration as well as the leadership of the FBI.

Character development leaves something to be desired and I felt that the emphasis on a lot of conversation does detract somewhat from what is a great idea and worthy of an Olen Steinhauer novel.

This entry was posted on Saturday, August 11th, 2018 at 6:00 AM and is filed under Book Reviews, Crime Fiction, Fiction. You can follow any responses to this entry through the RSS 2.0 feed. Both comments and pings are currently closed.