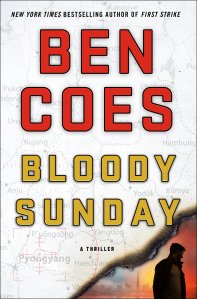 There is one thing absolutely sure about any book featuring Dewey Andreas – there will be action galore! Since Ben Coes first introduced Dewey as an employee of an ocean-going drill rig, his character has grown in stature and the violence that he interacts with along with his increasing importance to the U.S. government. Bloody Sunday finds Dewey reeling from previous adventures narrated in prior books. He is getting ready to retire from the CIA and just relax. Obviously this is not a possibility for Dewey – his country needs him and fast.

North Korea has successfully developed nuclear bombs but not the long range missiles necessary to deliver them to their arch enemy – the United States. But of course where there is a will there is always a way and so it is that a trade has been planned between the North Koreans and another mad regime in Iran.

The Iranians will exchange two missiles for nuclear triggers and fissionable material to help them develop their own anti west weaponry. But both of these evil doers have not reckoned on Dewey Andreas being called up by the president of the United States to break up the scheme.

Present with the CIA is a brilliant British agent on loan to aid in inter-agency relations. It is a young lady who is quite pretty and trying to get over the murder of her husband. It is thought that her husband was killed in error in place of her. Jenna Hartford, the exchange agent has come up with a scheme to inject a poison into the person of the high level North Korean officer that will be handling the trade between Iran and his country. An antidote would be hidden somewhere in the city of Pyongyang the capital of North Korea to deliver to the officer injected once he delivers the secret plans for the firing of the missiles to the U.S. Obviously Dewey is the ideal man to handle the tasks of both breaking up the trade,and injecting the poison.

Action involves the first set of problems complicated by Dewey injecting himself with a tiny quantity of the poison and than having only 24 hours to go after the antidote. The events are machine gun fast and calculated to keep the reader drawn to the book with no inclination to put it down. Of course the novel leaves us with the ingredients for the next book featuring Dewey Andreas and the possibility of a romance while involved with the events he faces.

This entry was posted on Sunday, August 5th, 2018 at 4:00 PM and is filed under Book Reviews, Crime Fiction, Fiction. You can follow any responses to this entry through the RSS 2.0 feed. Both comments and pings are currently closed.