WHEN WE FOUND HOME by Susan Mallery 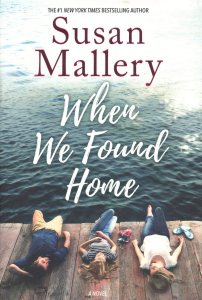 The Carlesso family is not your typical family. The patriarch, Alberto, had one son who wasn’t a very good person. Alberto found out he had a grandson, Malcolm, when the child’s mother turned up, 12-year-old in tow, and he took them in while his son continued his traveling and playboy lifestyle. Malcolm’s mother dies but Alberto takes care of him, and he joins the family business and grows it significantly. When Malcolm’s father passes away, Alberto waits a couple of years before going through his papers.

Alberto finally learns that his son had two other children, daughters, with two different mothers. He tracks down the youngest, Keira, who’s only 12-years-old, and he finds her in foster care. He arranges for her to move in with him and Malcolm. And he keeps searching for the older daughter, Callie, who is an adult at 26.

When Alberto finally tracks down Callie, Malcolm is shocked to learn that she has gotten out of prison a few years earlier. Nevertheless, Alberto invites her to move in with them as well.

Callie made a life altering mistake as a teenager, she robbed a liquor store with her boyfriend and she took the rap. She served her time and is trying to rebuild her life, which is not easy as an ex-felon. She is leery of this invitation but she really has nothing to lose so she moves in and asks for a job in the family business.

Meanwhile, Delaney has gone through some tragedy herself. She lost her fiance, a cop who was killed in the line of duty. That shooting also seriously injured her father, leaving him in a wheelchair. She left her high powered career in finance to take care of her dad and decides she wants change careers to something in medicine. She is working part time at a cafe in the same building as the Carlesso family business and has a bit of a crush on Malcolm. Unbeknownst to Delaney, she has also befriended Keira, who she recognizes as a lonely little girl but she doesn’t realize that Malcolm is the “asshole brother” that Keira frequently complains about.

These characters come together to form a family with a lot of issues, and the storylines are masterfully woven together. I loved these characters and couldn’t put this book down until the happy ending. Probably more women’s fiction than romance, nonetheless there is some romance too, after all that is what Mallery is known for. All in all, an excellent read and a fabulous book to take to the beach.

This entry was posted on Monday, July 23rd, 2018 at 6:00 AM and is filed under Book Reviews, Fiction, Romance, Women's Fiction. You can follow any responses to this entry through the RSS 2.0 feed. Both comments and pings are currently closed.