THE SOUL OF A THIEF by Steven Hartov 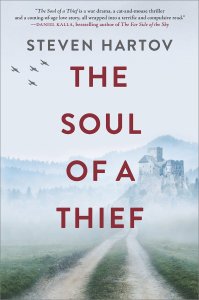 A really well done book dealing with war is generally anti-war in the final analysis. Certainly “The Soul of a Thief” is well done by any measure.

It is set during the final years of the Second World War and deals with a soldier serving with a unit of the German SS, a particularly crack unit with much glory attached to it’s record. Shtefan Brandt has been forced into the unit by circumstances beyond his control but is in no way enamored with becoming a hero and bringing glory upon himself. By chance Shtefan becomes the adjutant to the colonel commanding and eventually feels himself lucky to have this position. Shtefan by then current German law should not have been allowed to serve in the army since his grandmother was Jewish. His commander may or may not be aware of this but Erich Himmel not only brings Shtefan into the prominent position he holds but also treats him as he would a relative.

The unit sees action throughout Germany and France but also on the Russian front. They comport themselves as brave and loyal soldiers should with Himmel setting the pace with his solid leadership. While stationed in a town that has French citizens living there Col. Himmel discovers a nurse working at the hospital treating German wounded. Gabrielle Belmont is a beautiful girl and a good nurse. She is also Jewish and supposed to be beneath the attention of a German officer. But Himmel finds her very attractive and forces Gabrielle into a relationship with him. She must submit to his attentions or he will kill a group of Jewish orphans held in the area. In getting his colonel and Gabrielle together for evenings of love Shtefan and Gabrielle fall in love; a love that could have both of them executed if Himmel finds out.

The final complication is reached when Himmel receives information that a certain train carrying Nazi treasure will be traveling through the area that Allied soldiers will be marching through after their successful invasion of Normandy. Himmel makes the decision to desert a war effort that certainly looks like a losing fight for Germany. He plans to hijack the train take the treasure and desert the army and his German wife taking Gabrielle with him to a refuge planned for South America. Shtefan finds out what his colonel is planning and obviously wants the exact same thing for himself and Gabrielle.

A beautifully written book with extremely well done characterizations will not disappoint readers that will certainly be unable to set the novel down without finishing it. An extremely well done adventure into a bygone period of total war and a novel that left me with a warm feeling of having experienced something beyond the normal in its reading.

This entry was posted on Friday, April 27th, 2018 at 6:00 AM and is filed under Book Reviews, Fiction. You can follow any responses to this entry through the RSS 2.0 feed. Both comments and pings are currently closed.

2 Responses to THE SOUL OF A THIEF by Steven Hartov