AFTER ANNA by Lisa Scottoline 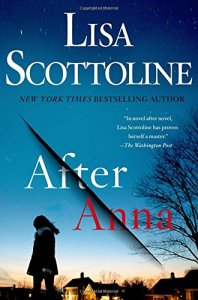 In this new standalone thriller, there are two sides of a heartwrenching story alternating chapter by chapter, and in a truly unique way, one is moving forward and the other is moving backward. Scottoline has the mad writing skills to pull it off and do it really well.

Dr. Noah Alderman is on trial for murdering Anna, and his story starts as he is in court, awaiting the verdict. Then his chapters move backwards in time, the closing argument, the last witness, etc.

Maggie Ippolitti is Noah’s second wife, stepmother to Caleb, Noah’s ten year old boy with a speech disorder. They are a very happy family. But Maggie has a past – she also was married before and had a daughter, Anna. She suffered from postpartum psychosis, and basically turned herself in to get help before she harmed her daughter. While she was hospitalized, her husband divorced her, had her declared unfit, and got custody, after which he took Anna to France, where his family lived. Shortly after that, he sold his startup company for many millions of dollars and dumped his daughter in one boarding school after another and Maggie hasn’t seen Anna since she was 6 months old.

By now, Anna is a senior in high school and when her father is killed in a plane crash, she contacts her mother. Maggie is beyond thrilled, and when Anna says she is unhappy in school, Maggie immediately invites her to live at home with her. Very quickly things start going badly. Anna seems uncomfortable with Noah, and accuses him of trying to molest her. She takes him to court, and Maggie gets her to settle by forcing Noah to move out. And then Anna turns up dead on Noah’s front porch.

I was reading away, completely engrossed with this family and their saga when suddenly the story took a hard turn and starting moving at breakneck speed to a really shocking ending. I stayed up late to finish it, then stayed up even later thinking about it. I love when that happens – don’t miss it!

This entry was posted on Tuesday, April 10th, 2018 at 7:00 AM and is filed under Book Reviews, Crime Fiction. You can follow any responses to this entry through the RSS 2.0 feed. Both comments and pings are currently closed.

2 Responses to AFTER ANNA by Lisa Scottoline