THE LAST EQUATION OF ISAAC SERVERY by Nova Jacobs 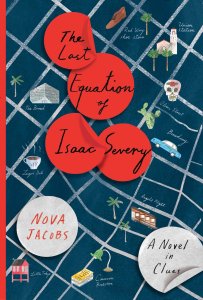 A Novel in Clues

The subtitle is “A Novel in Clues” and that is precisely what it is. Isaac Severy, the patriarch of an intellectually gifted family, passes away. His farewell note indicates that he knew he would die, and when, and also indicates that two others would become deceased and predicts the times. Murder, suicide, natural death? And what enables him to make such spot on predictions? Is it the equation that he has just finished?

Isaac sends a letter to his adopted granddaughter Hazel while she is in Los Angeles for his funeral. The letter alludes to a secret organization that is after the equation and will stop at nothing to obtain it. Isaac charges Hazel with finding said equation and delivering it to a close friend of his.

While still in Los Angles, Hazel comes to the realization that the equation has implications that could have disastrous consequences for her entire extended family and begins an exhaustive hunt for it. Clues sent to Hazel by her grandfather indicate that the equation can be found by clues hidden in one of her favorite novels, and we follow her reasoning and search through them.

Complicating events are the appearances of Isaac’s favorite son, a theoretical physicist, and a long lost cousin, both coming to Los Angeles. Do they know about the equation and what it can do? And of course the obvious question of what is it capable of?

The debut novel certainly bodes well for an exciting career for this author. It is  definitely one that will not let the reader put it down until finished and exhibits a literary style that is certainly captivating.

This entry was posted on Monday, March 5th, 2018 at 6:00 AM and is filed under Book Reviews, Crime Fiction, Fiction. You can follow any responses to this entry through the RSS 2.0 feed. Both comments and pings are currently closed.