THE WIFE BETWEEN US by Greer Hendricks & Sarah Pekkanen 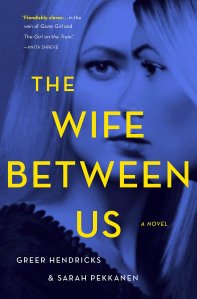 A very well written novel dealing with the interactions between a husband and his wife, and the woman that he is leaving the wife to marry.  A book that will grab you and have you reading without being able to put it down. It will bring you into the thoughts and actions of both women, wondering who is doing what to whom and what is happening with the husband.
Vanessa meets Richard, a charming, handsome and financially well off man.  She falls for him and he for her and they marry, with Vanessa’s expectations of enjoying a wonderful life with the man of her dreams.
Richard has a sister who Vanessa meets just before the ceremony who offers to help pick out the wedding dress and help with the menu for the meal.  The happy couple move up to Westchester, an upscale community north of New York City, after the wedding where Vanessa takes on the life of a full time wife with no need to help out with a second income. Her husband insists that she find something to do via volunteering and also to exercise and strictly maintain her weight which she does not object to.
Richard, who is a hedge fund manager, soon hires a new assistant named Emma.  It immediately becomes apparent that Emma also assists during the evening.  The gist of the story is about the interaction between the two women and  Richard and who does what to whom. The reader will change their opinion several times about what is really going on during the course of reading the book. Thought processes of both women are utilized by the authors to move the novel forward with the action based on what they are thinking and doing at the time.
A mesmerizing story guaranteed to keep the reader glued to the book and not at all being able to postulate the ending. That finale is based on facts brought out and logical after the fact. Pekkanen is an experienced writer with several novels under her belt, while Hendricks has been an editor with Simon & Schuster for over 20 years, but this is her first novel. Their combined input makes this a work that is guaranteed to make any reader avidly wanting the next book.

Note from the BookBitch: This book is getting a lot of buzz and comparisons to the big “girl books” of previous years, “Gone Girl” by Gillian Flynn and “Girl on the Train” by Paula Hawkins. Furthermore:

Observing that “the same book scout who urged Holly Bario to buy the rights to the book The Girl on the Train when it was a mere manuscript has struck again,” the Hollywood Reporter wrote that Steven Spielberg’s Amblin Partners, where Bario is president of production, “is now planning a film of the psychological thriller The Wife Between Us by a new writing duo: Greer Hendricks and Sarah Pekkanen.

This entry was posted on Tuesday, January 9th, 2018 at 6:00 AM and is filed under Book Reviews, Crime Fiction, Fiction. You can follow any responses to this entry through the RSS 2.0 feed. Both comments and pings are currently closed.