INTO A DARK FRONTIER by John Mangan 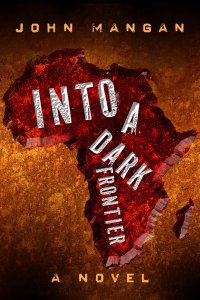 Like your action fast and furious? Like it even more when it is authored by a veteran of action packed combat in real conflict zones. The setting of this novel is in the near future when the African continent has collapsed collectively into a near failed state loosely supervised by the U. N. We meet Slade Crawford, a veteran of nearly 20 years of front line combat, who has been falsely accused of terrorism and is fleeing to Africa to escape his captors. Slade has contracted to lead a group of settlers from the United States looking to make a new life in Africa.

The group lands in Cape Town and begins a journey to the site they intend to settle on which is to the north of South Africa with Slade in military command. The trip is filled with danger and the attacks of a group looking to prevent colonization that has already massacred other colonists looking to settle in Africa. Crawford finds a liking for the goals of the group and also attracts a pretty teenager; a girl half his age that appears to flirt with him. Slade was divorced by his wife and also lost a son just prior to being arrested for terrorism. The double whammy puts him on a path of not caring about anything but the goal of getting his settlers to their destination.

The final section of the novel puts Slade under the orders of the mysterious American Colonel Gary Kraven. The colonel feels free to issue orders to Crawford without telling him what the real situation is that Kraven is following militarily.  Slade ends up going to Nairobi in Kenya under orders from the colonel but also to rescue the pretty teenager that has been following him and was captured by the group involved in preventing African colonization. Slade is now placed in a situation of asking Col. Kraven to help him with the rescue at the price of agreeing to work for him on a full-time basis.

After spending several nights up reading Lt Col(his actual rank) Mangan’s book the reader can take a break and catch their breath while impatiently awaiting the next adventure of Slade Crawford.  A definite keeper and one to follow.

This entry was posted on Wednesday, September 13th, 2017 at 6:00 AM and is filed under Book Reviews, Crime Fiction, Fiction. You can follow any responses to this entry through the RSS 2.0 feed. Both comments and pings are currently closed.