THE SIMPLICITY OF CIDER by Amy E. Reichert 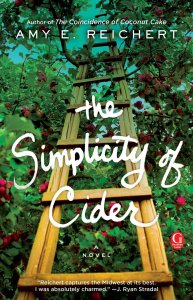 Sanna Lund is the fifth generation to live and work on the family apple orchard in Door County, Wisconsin. Once a thriving family business, now it is just Sanna and her aging father, and business is terrible. Sanna is obsessed with making cider, but doesn’t have the first idea about how to sell it.  Her father borrowed money to purchase all the expensive equipment necessary for making and bottling cider, but it is just collecting dust. She also has a gift – she can see colors in the apples that grow on their orchard. By mixing different colored apples she can achieve the flavors she wants. It’s the touch of magical realism that Reichert is known for.

Isaac Banks is a web designer whose ex-wife, a drug addict, has overdosed and died. Their young son, Bass, doesn’t know and Isaac can’t bear to tell him, so instead he takes him on a road trip for the summer. They wander aimlessly until they reach Door County, where he learns the Lund family could use some help in their orchard. Sanna is suspicious when her father hires Isaac, but they have a trailer out back where father and son can live. Then the senior Lund falls off a ladder and is seriously injured, and it’s Isaac and Bass that pick up the slack.

Sanna is surprised to find herself attracted to Isaac, and he to her, but he also realizes that he is going to have to move very slowly to win her over. Sanna has a brother who moved away from the orchard and is now trying to talk her father into selling to a big developer. There are other complications along the way before the happily ever after is reached.

Another enjoyable and delicious read – with recipes.

Enjoy this short video – Amy E. Reichert talks about her new book, THE SIMPLICITY OF CIDER, and why Wisconsin is more romantic than you thought!

This entry was posted on Thursday, May 18th, 2017 at 6:00 AM and is filed under Book Reviews, Fiction, Romance. You can follow any responses to this entry through the RSS 2.0 feed. Both comments and pings are currently closed.