HIS COWBOY HEART by Jennifer Ryan 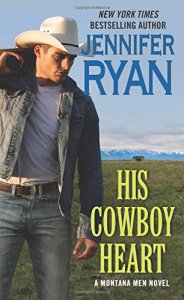 This is a modern day cowboy romance with a significant twist.

Ford Kendrick and Jamie Keller have been sweethearts forever, dreaming of moving away from their small Montana town and starting their own ranch somewhere. But when Ford’s family runs into some financial problems and his grandfather’s health is precarious, he knows all his savings have to go into the family business and that he’ll have to stick around to help out.

Ford pushes Jamie away, telling her she needs to go and make her own way somewhere else without telling her why. Heartbroken, she heads to Georgia and ends up enlisting in the army.

Jamie returns home to Montana with severe PTSD – and this was quite an unusual twist. I’ve read romances where the men have come home from war with issues but this was a first for me. Jamie is in a very bad way. She’s got serious physical issues and scars, but it’s her mental problems that are really crippling.

At lunch with her mother, a woman who is completely devoid of empathy, Jamie loses it and causes a scene. Ford is at the same restaurant, and sees her. Determined to help, he shows up at her house and she almost kills him, blasting gunfire through the front door in a drunken, drugged haze. This just makes him more determined to find their happy ending, but that’s only half the story.

The other half of the story is what happened to Jamie. She knows she was burned and shot, and that one of the men in her group saved her life. But they were the only two survivors and she lost the rest of her friends that day. Understandingly, she has completely blocked out her memories of that day. Getting psychiatric help from the Army via Skype, she is not making much progress with her memory of that fateful day.

I must admit this was not that big a mystery, even I figured out what had happened pretty early on. But this deep dive into PTSD and the repercussions after soldiers return home felt brutally honest – especially in light of this article I had read about it in the New York Times Magazine a while back. Well, that article just won the Pulitzer Prize and I highly recommend reading it, and this book.

For more information on PTSD, read this Pulitzer Prize winning piece from the New York Times: The Fighter

This entry was posted on Wednesday, April 12th, 2017 at 6:00 AM and is filed under Book Reviews, Fiction, Romance. You can follow any responses to this entry through the RSS 2.0 feed. Both comments and pings are currently closed.