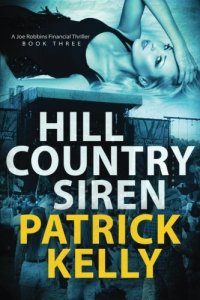 1. Hill Country Siren is your third Joe Robbins financial thriller. What can you tell us about Joe, and how does this book continue the traditions established by the other novels in the series?

As a freelance CFO, Joe is an analytical thinker. But, at the same time, his modest upbringing and early boxing experience have made him a man of action.

Joe’s recklessness is a source of great tension between him and his wife, Rose. In the second novel, Hill Country Rage, with their marriage on the brink of ruin, Rose proclaims, “You run to trouble like a moth to flame, Joey. Like a moth to flame.”

2. In Hill Country Siren, Joe takes on a fraud case for a famous Austin-born country rock singer named Sophie Tyler. What’s special about Sophie, and why is helping her so important to Joe?

The first line in the novel reads, “I fell in love with Sophie Tyler long before she hired me.”

Joe first heard Sophie’s music when he was a teenager in high school, so when he lands the assignment to work for her on the fraud case, he feels as if he’s won the lottery without buying a ticket.

The inspiration for Sophie’s character and the book’s title came from Homer’s ancient tale, the Odyssey. I think we’ve all heard music so beautiful it transforms us. During Sophie’s long career many men found her irresistible, and Joe is no exception.

3. As Joe delves deeper into Sophie’s background, he discovers that there are a number of individuals who might be motivated to steal Sophie’s money. Who are the most compelling suspects, and what clues does Joe use to solve the mystery surrounding Sophie’s case?

Sophie’s talent agent, Halet Blevins, is an aging womanizer with a great sense of style and a history of drug and money problems. Keri Theroux, Sophie’s best friend since high school, has begun to question her lifelong membership to Sophie’s entourage. Halet and Keri are high on Joe’s list of suspects.

But I believe that Johnson Sagebrush—Sophie’s enigmatic manager—is my best bad guy yet because of his name, his mysterious past, and his choice of weapon: Johnson favors a crowbar.

Joe begins his investigation by following the cash. As a freelance CFO, Joe is in a unique position to find loose ends that indicate something is afoul. In Hill Country Siren, he discovers a fraudulent wire transfer, an investment in a fake tech company, and a real estate scam. And as always, Joe must use his analytical mind to solve the mystery and his fighting skills to clean up the mess.

4. Hill Country Siren takes place partly at Sophie’s mansion in Los Angeles and partly at a music festival in Austin, both Sophie and Joe’s hometown. How integral are L.A. and Austin to this particular Joe Robbins mystery, and why did you place the story in these two settings?

I like to use iconic locations in Austin and the Hill Country for key scenes. In Hill Country Greed, a girl commits suicide by hanging herself from the balcony of the Driskill Hotel. In Hill Country Rage, Joe fights a giant in the waters of Lake Travis. And in Hill Country Siren, Joe goes undercover at the Austin City Limits festival. Setting Joe up to guard a celebrity and search for a suspect in the middle of sixty thousand fans made for great tension.

Lots of celebrities live in Los Angeles, so it seemed natural to set part of the action in Beverly Hills. That gave me a setting for a terrific fight scene at Sophie’s mansion. I also had fun contrasting the fabulous weather of L.A. with Austin’s brutal summer heat. And finally, my grown children live in Southern California so, of course, for the sake of research, I had to visit them twice while writing the novel.

5. Joe’s ex-wife, Rose, and his two daughters, Chandler and Callie, play important roles in all of the Joe Robbins mysteries. Can you tell us a little about what’s in store for them in Hill Country Siren?

At the end of Hill Country Rage, it appears that Joe has finally accepted that he and Rose will not be reunited, but early on in Hill Country Siren, we learn that Joe still has feelings for her. As for Rose, she has taken her relationship with Dave Moreton (who she first met in Hill Country Rage) to the next logical step.

Joe wants his daughters to remain his little girls forever, but Chandler, Joe’s twelve year old, is physically and emotionally transitioning from girl to woman. As the oldest daughter, Chandler tries to protect her sister from the fallout of her parents’ split. This realization adds to Joe’s stress as he strives to solve the mystery.

6. Are you working on another Joe Robbins mystery? If so, what can you tell us about it?

I have the next three Joe Robbins novels roughed out in my mind, but it will take some time to reduce those ideas to the page. In one novel, Joe will return to Dallas to investigate a fraud at his old company, Liberty Air. While there, Joe will spend quality time with his father and sister (neither of whom readers have yet met), as well as an old love interest.

In a subsequent novel, Joe’s adolescent daughters will join an organization that he soon suspects of perpetrating a massive fraud. And, of course, there is the ongoing question of whether Joe and Rose will reunite. On this subject readers’ views range from Joe just needs to move on . . . to . . . Joe and Rose forever.

I’d also like to take Joe on vacation. Austin gets hot this time of year. I thought perhaps the Greek island of Santorini would make for a good setting, but I’ll need to research it first.

Joe loved Sophie Tyler long before she hired him. She was a hometown hero, a musician who grew up in Austin and made the big time. Joe first heard her music in high school; he’d buy her albums and play them over and over, and dream.

Twenty years later, Sophie has left a trail of lovers behind her; she draws them in like a maelstrom, the outcome pre-ordained. When she hires Joe to investigate a fraud he solves the case in a couple days, but then the perpetrator is brutally murdered, and Joe finds himself pulled into a world of stardom, and enchantment, and the frightening path of a freshly awakened serial killer.

As Joe pursues the killer from Austin to Cabos San Lucas to Beverly Hills, he falls dangerously in love with the Hill Country Siren. 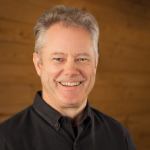 Patrick Kelly holds a BA in software engineering from the University of Virginia and an MBA in finance from Carnegie Mellon University. He served as Chief Financial Officer for six different companies before beginning his career as an author of the Joe Robbins Financial Thriller series. Kelly resides in Austin, Texas, with his wife and family.

This entry was posted on Saturday, October 22nd, 2016 at 6:00 AM and is filed under Guest Bloggers. You can follow any responses to this entry through the RSS 2.0 feed. Both comments and pings are currently closed.