THE UNYIELDING FUTURE by Brian O’Grady 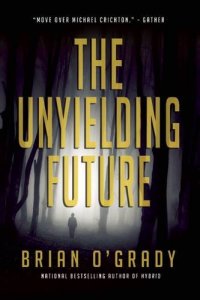 Brian O’Grady brings his readers into a world that introduces the concept of forces that act as Yang and Yin in the course of human events. They can prevent massacres, on the other hand arrange for murders and guide the actions of humans. These are not just abstract entities, but humans, long lived, 2 thousand year old humans that can interact with normal people if they so wish.

O’Grady puts a doctor and his family into the paths of two of these entities when they are part of a major accident and a seemingly old man arrives on the scene. In spite of what appears to be advanced age and consequent weakness this individual saves many lives and appears normal once the deed is accomplished.

The novel is both perplexing and enticing. What is the motivation of these people since there is more than one.  Are they truly the Yang and Yin of our world representing opposite reactions to events, or they are part of the same following similar patterns and drives. The answers are not so clear but do cause  thinking that might admit that such forces exist and influence events. A compelling read and certainly stimulating a desire to read more of Brian O’Grady’s books.

This entry was posted on Wednesday, September 2nd, 2015 at 6:00 AM and is filed under Book Reviews, Crime Fiction. You can follow any responses to this entry through the RSS 2.0 feed. Both comments and pings are currently closed.