ONLY A PROMISE by Mary Balogh 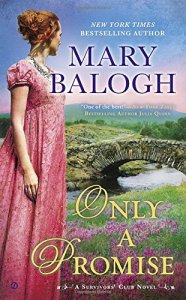 Just to recap, this series focuses on a group of men who all sustained injuries during the Napoleonic Wars. The Duke of Stanbrook, having lost his son in that war, had invited this group of men with various serious injuries, and one woman who had the misfortune of seeing her husband tortured and killed, to recuperate at his estate. They spend a few years there healing, form an eternal bond, and after they have healed enough to return to the world, they meet up once a year at the estate to renew their bonds.

By this fifth book, four of the men have married – all but Ralph Stockwood, next in line to be the Duke of Worthington. He lost his childhood friends in the war, and suffers extreme guilt that he talked them into fighting. While physically scarred from the war, it is the emotional scars that have truly crippled him.

With the Duke more than 80 years old, his mother and grandparents are pressuring him to marry quickly and produce his own heir. But Stockwood feels cold and empty inside, and hesitates to make a union when he knows he will make his bride unhappy. Nevertheless, with his title and his money, girls are lining up for him.

The Duchess has a young companion, Chloe Muirhead, who has had quite a bit of scandal and heartache in her young life. At 27, she has no prospects at all. When Stockwood arrives for a visit, he overlooks her presence and has a frank talk with his grandmother about his marital prospects. The next morning, Chloe steels her nerve and makes him a proposal –  a marriage of convenience. Neither wants nor expects love, but Chloe would like her own home and a family, and Ralph needs a wife and heir. They marry quickly, and prepare to face society.

Chloe and Ralph overcome many obstacles, which of course bring them closer together. Theirs is a slow growing love, which takes them both by surprise. The sex scenes were surprising to me, almost chaste and somehow seem fitting for the time period and this marriage – but that eventually changes.

Once again Balogh creates wonderful characters and a magical romance. I loved it.

This entry was posted on Sunday, July 5th, 2015 at 7:00 AM and is filed under Book Reviews, Fiction, Romance. You can follow any responses to this entry through the RSS 2.0 feed. Both comments and pings are currently closed.

2 Responses to ONLY A PROMISE by Mary Balogh