THE FATEFUL LIGHTNING by Jeff Shaara 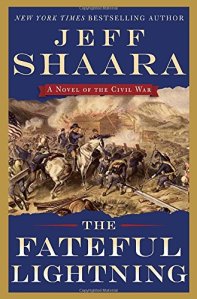 A Novel of the Civil War

With the writing of The Fateful Lightning, Jeff Shaara brings to a conclusion his monumental work about the Civil War in the West.

The book follows the style of the preceding presentations in the series. It is painstakingly researched and documented. Studied examinations via writings, written accounts and third person descriptions of a select group of participants bring them to life for the reader. Using literary license based on careful study, thoughts, conversations and opinions read, conversations and remarks of the characters involved allow supposed dialogs to be attributed to the leading protagonists  presented as pivotal to the story told.

The book opens as the city of Atlanta is captured by union forces, burned and creates a departure point for General William T. Sherman’s famous march to the sea. In the eight months covered by the book there are no major battles fought, but a long series of skirmishes between the opposing forces that push the Confederacy back and lead to their ultimate surrender.

Leading characters involved and followed in the narrative go from General Sherman, who was second to Ulysses S. Grant commanding the Union armies, to General Joseph Johnston, Confederate general who agonized over the need to surrender to Sherman in order to avoid further unnecessary bloodshed. The adventures of a slave freed by the Emancipation Proclamation, named only Franklin, are included, indicating his need to follow Sherman’s army in order to eat and find protection.

Franklin’s adventures are chronicled in later reports about him, indicating that this man actually lived and experienced the trauma of becoming a free man and finding a place in society for himself and his wife.

Shaara’s disdain for the Southern president Jefferson Davis and his inability to recognize talent is evident in the blame placed on him for his major contribution to the defeat of the Confederacy. The normally accepted surrender by Robert E. Lee to Ulysses Grant is shown to be just the first surrender of a southern army. Sherman and Johnston’s later dialogs and decisions regarding surrender are considered by Shaara to be of greater import than the short meeting between Grant and Lee.

The attempt by the Union’s Secretary of War to impose harsher sanctions on the south and Sherman’s fight to retain the original conditions met in the surrender at Appomattox courthouse are an obstacle not covered by most historians.

A brilliantly conceived and written series of historical works delineating the agonizing conflict of Americans against Americans is brought to a satisfying conclusion by The Fateful Lightning.  One wonders if Shaara can find the proper field to bring forth his next book. I hope that his energy level will permit this to be done in the near future.

This entry was posted on Saturday, June 6th, 2015 at 7:00 AM and is filed under Book Reviews, Fiction. You can follow any responses to this entry through the RSS 2.0 feed. Both comments and pings are currently closed.