Dr. Lou Welcome is a fine Boston emergency room physician who also happens to be a recovering addict. He is asked to cover for his boss at a medical conference in Atlanta, and takes his best friend, Cap, along.

While out trail running, a slippery slope causes Cap to severely injure his leg, and Lou manages to get him to the hospital but that’s just the beginning of Cap’s problems. He picks up a new bug, nicknamed the “Doomsday Germ” by the press, while hospitalized.

Turns out a right wing domestic terrorist group was the creator of the germ, which they planned on using to blackmail the U.S. government into shutting down all entitlement programs. But the flesh eating bacteria just grew out of control and completely resistant to all known treatments, including the cure the terrorists thought they had, and even the Center for Disease Control is stumped. The F.B.I. gets involved, and the race between the government and the terrorists is on to find a cure before thousands die.

Over the years, Palmer has grown an audience for his medical thrillers, and this page turner should keep them happy. 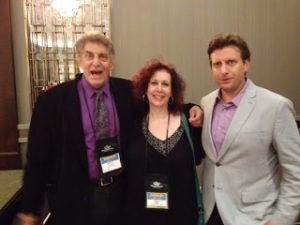 On a personal note, I need to add how saddened I was when Michael Palmer passed away in late October, 2013. I had the privilege of meeting him on several occasions, and he was a real mensch – warm, charismatic and just a wonderful human being. He always remembered to ask about my kids and was always available to anyone who needed anything.

I met Michael through the International Thriller Writers organization at ThrillerFest, their annual convention. I was always so happy to see him at conventions because he always seemed so happy to see me; his smile was infectious.

When I was looking for authors willing to visit my library, I only had to ask him once. Not only did he come down, he brought Daniel along, too, and my library patrons got to meet two authors, who not only spoke about their books, but played music and sang. It was such a fun event and a real treat for me & my patrons.

I checked with St. Martin’s Press and they informed me that Michael left one more book behind, which is scheduled for May 2015.

Michael holds a special place in my heart and I will always remember him fondly.

5/14 Stacy Alesi, AKA the BookBitch

This entry was posted on Tuesday, May 20th, 2014 at 9:00 AM and is filed under Book Reviews, Crime Fiction, Fiction. You can follow any responses to this entry through the RSS 2.0 feed. Both comments and pings are currently closed.