THE PALACE by Christopher Reich 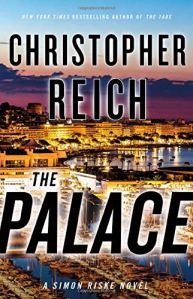 In his greatest challenge yet, international spy Simon Riske must face a ring of ruthless masterminds and foil a plot with global implications as he becomes the world’s most wanted man.

Life is good for Rafael de Bourbon. The forty-year-old Spaniard recently married to a wealthy English beauty, and is days away from opening a luxury boutique hotel off the southern coast of Thailand. But when the Royal Thai Police storm the hotel and arrest him for blackmail and extortion, “Rafa” is thrown into Bangkok’s most notorious jail. In desperation, he reaches out to the one man who can prove his innocence.

Simon Riske, ex-con and now “private spy,” owes Rafa his life. Once he and De Bourbon were the closest of friends, until a woman came between them. Riske rushes to Bangkok to secure his friend’s release and overnight, finds himself caught up in a web of intrigue larger and more dangerous than he could imagine. In hours, it is Riske who finds himself the wanted man.

On the run in a foreign country, pursued by powerful unseen forces who will stop at nothing until he is killed, Riske must stay alive long enough to uncover the truth behind an international conspiracy that threatens to wreak carnage across the glittering capitals of Europe. From Bangkok to Singapore and ultimately to Cannes, Riske enlists the help of a daring investigative reporter, a rogue Mossad agent, and his own band of home-grown specialists, to thwart the cabal behind the plot, only to learn its very origins are frighteningly close to his past.

Frighteningly timely, diabolically clever, and ever so stylish, The Palace is Christopher Reich’s sharpest and most exciting book yet.

This is a novel that has all the ingredients to keep the reader glued to the pages. It is high adventure played out in exotic parts of the world and by people with titanic fortunes at their disposal and greedy to add to their wealth.

This is Christopher Reich’s third book featuring Simon Riske, now a private spy, formerly ex-convict, and a man that takes on problem-solving wherever and whenever the mood strikes him. He has the wealth to do so and to also ensure that the ability of a client to pay him has nothing to do with taking on any challenge.

Rafael de Bourbon is a friend of Riske’s and had once literally saved his life. He is also married to a woman that Riske was once in love with. He is in Thailand and in the process of opening up a luxury boutique hotel. While working at finishing up the work on his proposed hotel he is subjected to a raid by Royal Thai police and charged with blackmail and extortion. With no evidence produced, Rafael is thrown into Bangkok’s worse jail. In desperation, he manages to contact Simon Riske who feels obligated to travel to Thailand and work on getting his friend freed.

Simon quickly discovers that Rafael is somehow mixed up in a plot of immense magnitude and incidentally finds himself mixed up in the problem. In working on the solution, the Israeli Mossad, a world-famous financial lady author, and more friends of his join in the proceedings with Simon to come to grips with joining into the search for answers.

The format of the book is continued action, action, and more action with trips undertaken to various countries that have a place in the scheme of things. Needless to say, there is no rest on this one. Another all-nighter for readers of the book, and of course awaiting the next novel by the author.

This entry was posted on Tuesday, August 4th, 2020 at 8:00 AM and is filed under Book Reviews, Crime Fiction. You can follow any responses to this entry through the RSS 2.0 feed. Both comments and pings are currently closed.