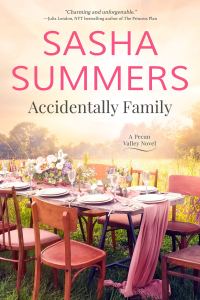 Life for Felicity, and her teen children, is finally back on track. After her divorce, she wasn’t sure if her sweet family would ever be the same. But things are good––right up until her ex’s spirited toddler lands on Felicity’s doorstep. If the universe is going to throw lemons at her, thank God she has her best friend, Graham, to help her make lemonade out of them. How did she never notice how kind and sexy he is?

Graham is still recovering from his wife’s death years ago and trying to help his teen daughter get her life together. Who is he kidding? His daughter hates him. Forget lemons––he’s got the entire lemon tree. So when Felicity suggests they join forces and help each other, he’s all in. And suddenly he can’t stop thinking about her as more than just a friend. Too bad their timing couldn’t be worse…

Because life rarely goes as planned. Luckily there are many different kinds of family to hold you together and lift you up…plus maybe even a little love between friends.

Here’s my take on this story. Felicity is some sort of heiress, whose parents gave her their extremely large, 100-year-old home to live in after her husband leaves her for another, much younger woman. Who happens to be pregnant. She also has enough funds to completely renovate the house. There is a mention of her running a family business, a drugstore, but it is just a brief mention and we never see her go to work. Ever. Instead, she is the quintessential stay-at-home mommy of teenagers, both of whom are good kids. The kids handle the divorce differently. The daughter is resigned and is happy her mom is there for her. The son is an angry young man, albeit one who adores his mother and tries not to give her any grief. Like most teens.

The ex-husband is a complete jerk. We never really get to meet him so all we know about him is that since he’s shacked up with the girlfriend and she has the baby, he pretty much blows off his first two kids and misses all the ball games, recitals and what have you that he’d been attending throughout their young lives. The day of his oldest daughter’s high school graduation, he doesn’t show up. Again. But this time he has a good excuse.

The ex, the girlfriend, and the baby were in a terrible car accident. The girlfriend dies, the baby has some broken bones and is in a coma, and the ex is being rushed to surgery. Before he goes, he asks Felicity to take the baby to raise. He’s a doctor and he knows he is not going to make it.

Meanwhile, Felicity’s sister Charity comes home. She has spent years in Europe as a tour guide, but she has an excellent reason for giving up that life and settling back in the tiny town of Pecan Valley, where she is gifted with a travel agency by a friend of her grandmother’s who wants to retire. Not that she goes to work, either.

The male protagonist is Graham. He is also a doctor, and was partners with Felicity’s ex. But when the ex went off the partnership ended. Meanwhile, Graham’s wife died of cancer, leaving him desolate. His teenage daughter is very angry at him and their relationship is troubled, to say the least. But at his former partner’s funeral, he remembers that they all used to be the best of friends. Felicity and Graham both need a friend now, but that friendship soon turns to more.

If you can get past logic and practicality and suspend your disbelief, the rest of the book is good. I liked the characters and enjoyed spending time with them. The ending is very rushed and every loose end is neatly tied up. If this is the first book of a series, my hunch is that Charity will be next and then Felicity’s daughter. There is definite potential here and I am looking forward to more from this author.

This entry was posted on Thursday, May 28th, 2020 at 8:00 AM and is filed under Book Reviews, Fiction, Romance. You can follow any responses to this entry through the RSS 2.0 feed. Both comments and pings are currently closed.