THE OTHER MRS. by Mary Kubica 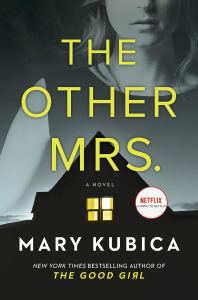 Propulsive and addictive, and perfect for fans of “You,” The Other Mrs. is the twisty new psychological thriller from Mary Kubica, the New York Times bestselling author of The Good Girl

Sadie and Will Foust have only just moved their family from bustling Chicago to small-town Maine when their neighbor Morgan Baines is found dead in her home. The murder rocks their tiny coastal island, but no one is more shaken than Sadie.

But it’s not just Morgan’s death that has Sadie on edge. And as the eyes of suspicion turn toward the new family in town, Sadie is drawn deeper into the mystery of what really happened that dark and deadly night. But Sadie must be careful, for the more she discovers about Mrs. Baines, the more she begins to realize just how much she has to lose if the truth ever comes to light.er investigation weaves together with the story of what really happened during their deliberation, told by each of the jurors in turn, the secrets they have all been keeping threaten to come out—with drastic consequences for all involved.

It’s a good thing that Mary Kubica can’t write a book every week because if that were the case I wouldn’t get any sleep. This novel, if not her best, is certainly near the top. Her styling grabs the reader from the start pulling him or her right into a great story and not letting up until the ending is reached. The ending is the epitome of a surprise and not what is thought of during most of the book. But, and definitely, a strong point after reading the novel a short reflection by the reader will provide the information that it is realistic, not one that is just juxtaposed in order to end the book.

Sadie and Will Foust have just moved away from their home in Chicago to a small island in the state of Maine. They inherited a house there from Will’s sister who has committed suicide after suffering from a long bout with Fibromyalgia and the unbearable pain that stems from the disease. Sadie is an MD and secures a position with the only medical office on the island while Will gets a teaching position in a city on the shore of Maine. All seems well with an idyllic existence laid out for them and their two children. The couple also adopts Will’s sister’s daughter who is devastated by her mother’s suicide and resents Sadie’s presence and having to live with her obeying her rules. But the couple understands the girl’s anguish and try to help her as much as possible.

Shortly after the family moves in a next-door neighbor is murdered; something the local police indicate is an almost nonexistent problem. Sadie is very affected and frightened by the event. She begins wondering if the murderer is hiding in one of the homes on the island that is temporarily uninhabited while their owners are away during the off season. Sadie is also seeing a psychiatrist due to having had issues with lapses of memory and disassociation. It is felt that the condition is treatable and Will is very supportive of his wife. He helps Sadie in many ways including cooking and cleaning the house as well as making sure the children leave for school and are picked up afterward.

The novel is, of course, a five-star book, and my advice is to keep on the lookout for Kubica’s next book in order to get it hot off the press.

This entry was posted on Friday, February 21st, 2020 at 8:00 AM and is filed under Book Reviews, Crime Fiction, Fiction. You can follow any responses to this entry through the RSS 2.0 feed. Both comments and pings are currently closed.

One Response to THE OTHER MRS. by Mary Kubica