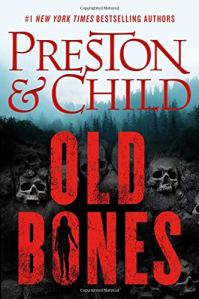 The very prolific writing team of Preston and Child introduce a new pair of lead protagonists. They each have appeared shortly in one of the authors’ books featuring their Sherlock Holmes lookalike Agent Pendergast. Starting with this novel, they appear to be headed for their own series of stories. Nora Kelly is a young curator for the Santa Fe Institute of Archaeology and Carrie Swanson a fledgling agent for the FBI.

The story begins when Clive Benton, a recognized historian, approaches Nora with information he has received pointing towards the finding of the lost camp of the Donner party. The Donner party refers to a group of pioneers heading towards California during the years 1845-46. In crossing the Sierras they were trapped by massive snow storms. With no food to be had due to the weather they ate the animals with them – cats, dogs, and the oxen pulling their wagons. The culmination of their plight resulted in a documented case of cannibalism.

Benton requests that Nora’s employer finance an archaeological expedition to reach the lost third Donner site, and to sweeten the pie indicates that one of the people with them was carrying a fortune in gold coins. The institution agrees that the find itself would be a major discovery with the possible discovery and recovery of the gold coins a great addition. The expedition is arranged and due to Benton’s information the third site is found and digging begins.

There is no problem enjoying another well written book by the two authors but it would not be like them if a bit of the macabre was not introduced. Could there be something supernatural mixed in with the bones and relics found? Probably yes and how, if there, does it affect the story? Very few of the novels that I have read by the authors is less than a five star book and “Old Bones” is no exception.

This entry was posted on Wednesday, August 21st, 2019 at 8:00 AM and is filed under Book Reviews, Crime Fiction, Fiction. You can follow any responses to this entry through the RSS 2.0 feed. Both comments and pings are currently closed.

One Response to OLD BONES by Douglas Preston & Lincoln Child