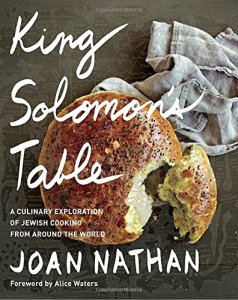 A Culinary Exploration of Jewish Cooking from Around the World

Joan Nathan is the queen of Jewish cookbooks, and her latest is terrific. Be sure to read the introduction, a history of Jewish food that is completely fascinating, as well as a short but clear explanation of Jewish dietary laws, kashrut. The recipes included are all kosher, including substitutions as needed, although there is a caveat to check with your rabbi if you are not sure.

The forward is written by Alice Waters, so that was also a must read for me.

The book is divided as follows:

There is also an excellent index and bibliography.

The recipes have basis in many countries, even some I never thought of as especially Jewish, like Mexico and Sri Lanka. All are interesting, some are trendy (Shakshuka, anyone?) and some are classic, like Matzo Brei, Chopped Liver, and Apple Kuchen (cake). But it’s the unusual that really drew me to this cookbook, starting with Ferrara Haroset with Chestnuts, Pine Nuts, Pears and Dried Fruits from Rome. We liked this so much at Passover I used it again as a filling for Hamentaschen, and it worked beautifully. I would never have thought of using tahina in cookies, but Tahina Cookies made a believer out of me – if you like Halvah or Mexican Wedding Cookies, try these cookies.

I was partial to a lot of the Italian Jewish recipes, like Tagliolini colla Crosta, Crusty Pasta with a Bolognese Sauce that has pine nuts, ground almonds and raisins in it and Roman Ricotta Cheese Crostata with Cherries or Chocolate. The Spinach-Feta Burekas is Bulgarian, but is called Buricchi by Italian Jews, and Borek by Ottomans and Balkan Jews. It is a laminated dough filled with spinach and feta, and reminded me of the Greek Spanikopita. I have never attempted a laminated dough and probably will substitute filo dough here.

The Roast Turkey with Challah-Chestnut-Cranberry Stuffing is as delicious as it sounds – I cut the recipe in half and used it for a stuffed turkey breast and it worked really well. Yuca Latkes with Cilantro Cream, Sweet Plantain Guava Kugel and Green Chile Relelleno Latkes all have Hispanic origins, sometimes by way of Miami!

The final recipe in the book is Libyan Saefra, King Solomon’s Cake, which Nathan believes predates baklava and is believed to be an aphrodisiac. This is a filled cake, and the filling is a spiced date mixture. The ingredients are very unusual but not hard to find – Cream of Wheat and semolina are used instead of flour, for example.

All of the recipes include their origin stories, some are longer than others but all are interesting. You can see the research and the love that went into this cookbook.

This entry was posted on Monday, July 10th, 2017 at 6:00 AM and is filed under Book Reviews, Cookbook, Nonfiction. You can follow any responses to this entry through the RSS 2.0 feed. Both comments and pings are currently closed.