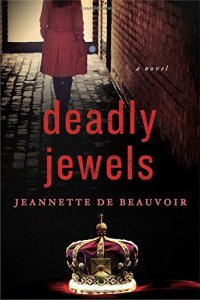 A McGill University doctoral candidate, Patricia Mason, has made an amazing discovery; she has found some of England’s crown jewels in a locked room under the city of Montreal, where they were hidden from the Nazis during World War II.

The mayor believes this find could be great publicity for the city, and calls in publicity director Martine LeDuc to put a good spin on it. It shouldn’t be difficult, until a skeleton is found alongside the jewels, a stone goes missing, and Mason is murdered.

LeDuc once again calls on her friend, Detective-Lieutenant Julian Fletcher, whose family’s wealth and prestige allow him great latitude with the police department, in this terrific second book (The Asylum, 2015) of the series.

Turns out a Neo-Nazi group is interested in the jewels, as they believe, as did Hitler, that the stones possess mystical powers. The story moves back and forth from very interesting World War II flashbacks to the present day, a riveting mystery. LeDuc’s personal life adds to her stress level, as her husband wants his children to move in with them on a permanent basis. Steve Berry fans should enjoy this.

Copyright ©2016 Booklist, a division of the American Library Association.

This entry was posted on Monday, March 7th, 2016 at 6:00 AM and is filed under Book Reviews, Crime Fiction, Fiction. You can follow any responses to this entry through the RSS 2.0 feed. Both comments and pings are currently closed.